Aldine ( AWL-deen) is a census-designated place (CDP) in unincorporated central Harris County, Texas, United States, located within the extraterritorial jurisdiction of Houston. The population was 15,869 at the 2010 census. The community is located on the Hardy Toll Road, Union Pacific Railroad, and Farm to Market Road 525.

Aldine, built on the International–Great Northern Railroad, was named after a local farm family . A post office operated in Aldine from 1896 to 1935; after 1935, mail was delivered from Houston. In 1914 Aldine included two general stores, a fig preserver, and several poultry breeders and several dairymen. The population briefly reached 100 in 1925. In the 1930s and 1940s the population decreased to between thirty and forty residents. The Aldine Independent School District was integrated by federal order in 1965. Aldine, with renewed population growth in the 1970s, had 12,623 residents in 1986 and 11,133 residents in 1990. 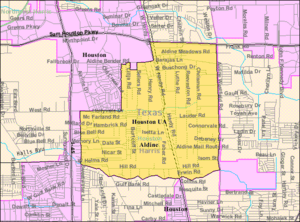 Map of the Aldine CDP 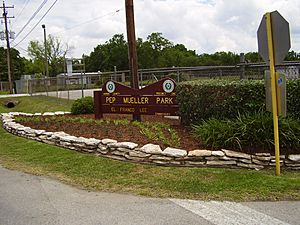 Harris County Precinct 1 operates Pep Mueller Park, located at 14750 Henry Road in Aldine. It was given its current name in 1981 to honor M. A. "Pep" Mueller, the superintendent of Precinct 4's Spring Camp, Road, and Bridge Maintenance Facility. The park has a playground, a community building, a basketball pavilion, a toilet and concession facility, four ball fields, and four press boxes. 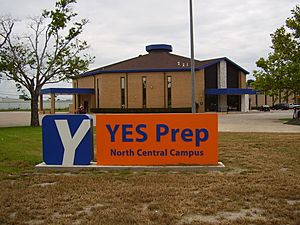 Aldine Independent School District serves the CDP and much of the surrounding community.

Middle schools serving Aldine CDP include Grantham (in Aldine CDP), Stovall (in Houston), and Aldine Middle (not in the CDP). 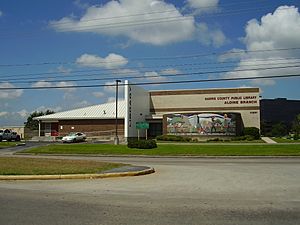 The Harris County Public Library Aldine Branch, located at 11331 Airline Drive in Greenspoint and in Houston, serves the community. The 13,268-square-foot (1,232.6 m2) branch opened in 1976. The renovated Aldine Branch reopened on September 6, 2001. The expansion and renovation was originally scheduled to be completed in January 2001. Due to the expansion, the library gained 6,000 square feet (560 m2), which led to increases in meeting spaces and a 100% increase in the number of computers. Students from Aldine High School, Aldine 9th Grade School, Stovall Middle School, and Black Elementary School use the branch.

All content from Kiddle encyclopedia articles (including the article images and facts) can be freely used under Attribution-ShareAlike license, unless stated otherwise. Cite this article:
Aldine, Texas Facts for Kids. Kiddle Encyclopedia.