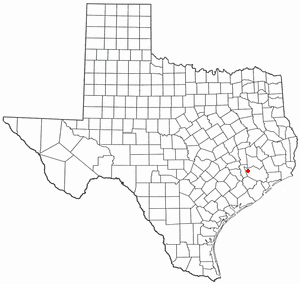 The community serves as the main hub for railway traffic serving Houston, Austin, and many parts of central Texas. The Southern Pacific (now known as Union Pacific) rail line is one of the community's major employers. The community is surrounded by grain farms and cattle ranches.

George Washington Hockley established Hockley in 1835. In 1906, a salt dome was discovered near Hockley and mined, especially for sulfur.

The county operates the Hockley Community Center at 28515 Old Washington Road. In 1982 the county bought 24 acres (97,000 m2) of land for a maintenance center and a community center. Bob Eckels, then the commissioner of Precinct 3, got a grant from the U.S. Department of Housing and Urban Development. Hermes Reed Hindman – Architects, Inc. developed the building and AIA Engineers and Contractors, Inc. served as the contractor. Construction ended in 1986.

All content from Kiddle encyclopedia articles (including the article images and facts) can be freely used under Attribution-ShareAlike license, unless stated otherwise. Cite this article:
Hockley, Texas Facts for Kids. Kiddle Encyclopedia.