Spring Valley Village is a city in Harris County, Texas, United States, and an enclave of Houston. The population was 3,715 at the 2010 U.S. census and 4,319 at the 2019 American Community Survey.

In 1936 state highway maps indicated a cemetery and a church. Initially the settlement consisted of one and one-half square miles.

In the mid-1950s, effort to form a Spring Branch municipality (proposed to be called the city of Spring Branch in roughly the area known today as the Memorial Villages) failed. The city incorporated in 1955 as Spring Valley. There had been two elections for incorporation. The first result was against incorporation, and state law mandated that the next election for incorporation of the same boundary would have to be held at least one year later. Some advocates of incorporation convinced Robert R. Casey, then a Harris county judge, to modify the boundary of the proposed area by removing the Campbell Place area and therefore many voters who opposed incorporating. The following election, held on April 9, 1955, was in favor of incorporation, 183 for and 165 against. Because of the 1955 incorporation, Houston did not incorporate Spring Valley's territory into its city limits, while Houston annexed surrounding areas that were unincorporated. In 1960 the city had 3,004 residents and two businesses. The city had 3,800 residents in 1976 and 3,392 residents in 1990.

According to the United States Census Bureau, the city has a total area of 1.3 square miles (3.4 km2), all of it land.

In 2019, the American Community Survey estimated the population of Spring Valley Village was 4,319.

There were 1,368 households, out of which 476 had children under the age of 18 living with them, 964 were married couples living together, 100 had a female householder with no husband present, and 269 were non-families. 243 households were made up of individuals, and 126 had someone living alone who was 65 years of age or older. The average household size was 2.72 and the average family size was 3.09. 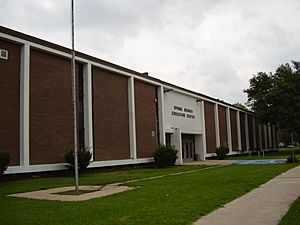 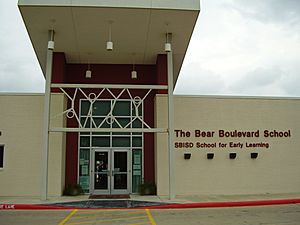 All content from Kiddle encyclopedia articles (including the article images and facts) can be freely used under Attribution-ShareAlike license, unless stated otherwise. Cite this article:
Spring Valley Village, Texas Facts for Kids. Kiddle Encyclopedia.