Spring Branch is a district in west-northwest Harris County, Texas, United States, roughly bordered by Tanner Road and Hempstead Road to the north, Beltway 8 to the west, Interstate 10 to the south, and the 610 Loop to the east; it is almost entirely within the City of Houston. Established by the Texas Legislature, the Spring Branch Management District exercises jurisdiction over the area.

Several minor bayous run through the community, including Brickhouse Gully, Spring Branch (the neighborhood namesake), and Briar Branch, which drain into Buffalo Bayou in central Houston. Spring Lake is a large pond near the center of the neighborhood. 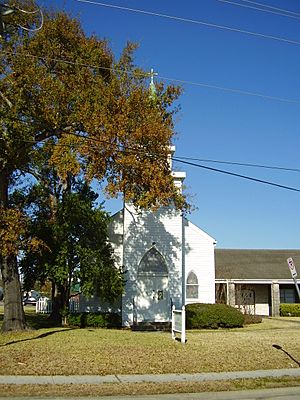 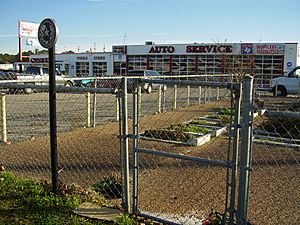 The 1,400 square feet (130 m2) plot pictured here has the graves of nineteen members of the Hillendahl family, including one who was interred in 1854. A descendant of the family sold all of the land around the grave site, but refused to move the actual graves.

Spring Branch began as a religious German farmer settlement; many of the farmers owned dairies. Karl Kolbe, who arrived in Texas from Germany in 1830, was Spring Branch's earliest settler. The Germans opened sawmills to cut area timber. In 1848, St. Peter's United (Lutheran) Church opened on a site donated from the Bauer family; the lumber used in the construction originated from one of the local sawmills. The Spring Branch School Society, sponsored by the church in 1856, eventually became the Spring Branch Independent School District.

By the 1980s, Houston's economy had collapsed and occupancy rates declined. Many apartment complexes faced foreclosure, bankruptcy, and changes in ownership. Bill Zermeno, a city electrical inspector, said in a 1988 Houston Chronicle article that many of the apartments with some of the strongest violations against maintenance-related city laws were in Spring Branch. Kim Cobb, the author of the 1988 Houston Chronicle article, said that many of the poorly maintained complexes were located next to well-maintained single family subdivisions.

From the 1980 U.S. Census to the 1990 Census, many Hispanics settled in parts of Spring Branch; in pockets of Spring Branch almost all of the immigration was from Central American countries. The Hispanic population increased by an amount between 1,000 and 3,500 per square mile. In 1997 S.D. Kim, the Houston bureau chief of The Korea Times, said that Koreatown, the Korean community in Spring Branch, grew because of inexpensive housing and the zoning to the Spring Branch Independent School District. In 1998 and again in 2001, a proposal to place Korean language street signs in Koreatown lead to political controversy; the reaction against the proposal lead to the withdrawal of the proposal. By 2006, Spring Branch Elementary School was mostly Hispanic, reflecting demographic changes in the Spring Branch area. By 2007 several older houses were torn down and replaced with newer houses; new homeowners came to Spring Branch to buy larger lots, to buy in an area cheaper than neighborhoods bordering Downtown Houston. New residents came due to the proximity to Downtown, Uptown, and the Energy Corridor.

In May 2011 the Spring Branch Central Super Neighborhood campaigned against having federal funds used to improve older apartment complexes in the area.

In 2013 Houstonia magazine stated that Spring Branch, including the adjacent cities of Hillshire Village and Spring Valley Village, was one of the "25 Hottest Neighborhoods" of Houston. 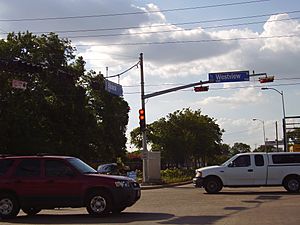 The intersection of Blalock and Westview, with Spring Branch street signs

Spring Branch is generally bounded by Beltway 8 on the western end, the 610 Loop on the eastern end, Interstate 10 on the southern end, and U.S. Highway 290 and Clay Road to the north.

Terrence McCoy of the Houston Press said in 2012 that in Spring Branch "[a]venues lined with orderly yards and American flags buttress shopping centers where Spanish dominates."

In 1983 there were a travel agent, an optical shop, multiple restaurants, a newsstand, a bookstore, a pharmacy, and a furniture store in Spring Branch catering to Koreans. 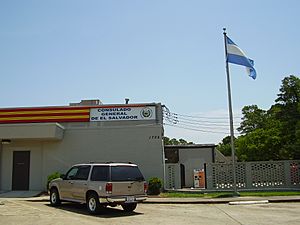 Consulate-General of El Salvador in Houston

The Consulate-General of El Salvador in Houston resides at 1720 Hillendahl Boulevard in Spring Branch.

Between the 1990 U.S. Census and the 2000 U.S. Census, as Spring Branch gained many Hispanic and Korean residents, many white residents left. Nestor Rodriguez, an immigration expert from the University of Houston, said that the white population of Spring Branch implied that many were leaving not because of racial differences but because the new residents were not middle class. Rodriguez said, "They don't say they're not middle-class, but they say, well, look at them, they're out on the street corners looking for work; we're not used to that. But those are characteristics of working-class or lower working-class people."

In 2000, the City of Houston's Super Neighborhoods located all or in part within Spring Branch reported the following population statistics: 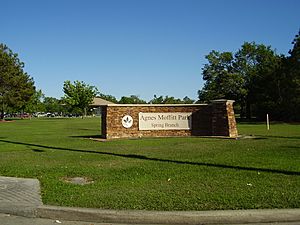 The Houston Parks and Recreation Department operates municipal parks within the Spring Branch Management District. Agnes Moffit Park, located at 10645 Hammerly Boulevard, has a swimming pool and a golf course. The R.L. and Cora Johnson Park is located at 9791 Tanner Road. The adjacent R. L. and Cora Johnson Community Center, located at 9801 Tanner Road, has a 0.25 mile hike and bicycle trail, a playground, an outdoor basketball pavilion, and lighted tennis courts. The park was originally known as the Carverdale Park; it was renamed in January 2009 after some civic leaders. Freed Park and Community Center is located at 7020 Shadyvilla Lane. The park has an indoor gymnasium, a .35 mile hike and bicycle trail, a playground, a lighted sports field. Schwartz Park is located at 8203 Vogue.

Previously, Igloo Corporation had a manufacturing facility in Spring Branch. The Spring Branch location also housed the company headquarters. In 2004, Igloo announced that it was consolidating to a location in unincorporated Waller County, Texas, near Katy.

By 2008 a Super H Mart supermarket, a part of a Korean American chain, opened. Purva Patel of the Houston Chronicle wrote that this supermarket attracted development to the area. 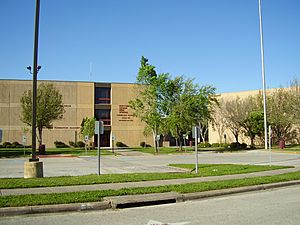 Spring Branch Independent School District serves most of the areas within the Spring Branch Management District, all of the Memorial area in Houston, and several small cities. 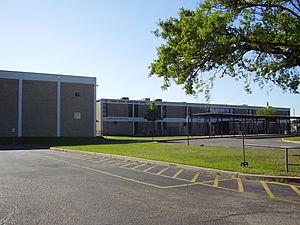 There is a small segment of land in the Spring Branch district that is within the Houston Independent School District. The land in this segment is used for industrial, commercial, and transportation/utility reasons.

School of the Woods is a college prep Montessori School for early childhood through grade 12 in nearby Hilshire Village; some of the school property is in Houston.

HCC operates the Spring Branch Center, a part of the Northwest College, in Memorial City. The facility was known as the Town and Country Campus until 2009. The college is inside the former Town and Country Mall. In 1999 a former 112,000-square-foot (10,400 m2) AMC Theatres and KMart building in Town and Country was re-tenanted to HCC. HCC signed its lease to occupy portions of the Town & Country Square Shopping Center in 1999. During that year the owners of the Town & Country Square Shopping Center filed a lawsuit against HCC for trying to stop a Barnes & Noble from opening in the shopping center premises. 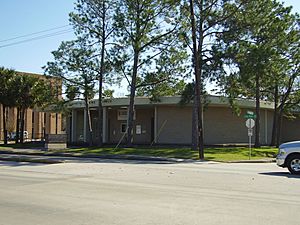 All content from Kiddle encyclopedia articles (including the article images and facts) can be freely used under Attribution-ShareAlike license, unless stated otherwise. Cite this article:
Spring Branch, Houston Facts for Kids. Kiddle Encyclopedia.