Uptown is a business district in Houston, located 6.2 miles (10.0 km) west of Downtown and is centered along Post Oak Boulevard and Westheimer Road (Farm to Market Road 1093). The Uptown District is roughly bounded by Woodway Drive to the north, the I-610 (West Loop) to the east, Richmond Avenue to the south, and Yorktown Street to the west. It covers 1,010 acres (410 ha).

At 23.6 million square feet (2.19 million square meters) of office space, the Uptown District is the 17th-largest business district in the United States, comparable in size to the downtowns of Denver and Pittsburgh. The district is home to approximately 2,000 companies and represents more than 11 percent of Houston's total office space.

In 1948 what is now Uptown was 3 miles (5 km) outside of the city limits of Houston. A local reporter described the roads as "lonely, unlit, pockmarked booby trap for nocturnal animals and boozed up motorists." Development increased after Gerald D. Hines and other individuals began to develop properties in Uptown in the 1960s. 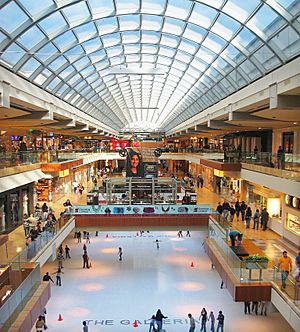 The Galleria in the Uptown District is the largest mall in Texas.

The Uptown District measures about 5 million square feet (500,000 m2) of retail space, and is the center for Houston's high-fashion retail. Various trendy shopping centers, eateries, and other sorts of entertainment venues exist in the district. Uptown is home to many upscale boutiques, as well as many Houston-based and local high-fashion designers and stores. Uptown is also host to Houston's largest hotels, which host about 20 million visitors a year.

A major feature of Uptown Houston is The Galleria, the largest shopping mall in the state of Texas and the seventh-largest in America. The Galleria hosts many of the upscale shops of the area as well as city-wide chain stores that appear in many Houston-area malls. It also includes several well-regarded restaurants and a large indoor ice skating rink.

The Uptown District is bounded by Woodway Drive to the north, the I-610 (West Loop) to the east, Interstate 69/U.S. Highway 59 to the south, and Yorktown Street to the west.

Several consulates-general are located in Uptown. The consulates of Angola, Argentina, Chile, France, Germany, India, Italy, Peru, Qatar, South Korea, Spain, Turkey,Vietnam, and the Consulate of the Netherlands are in Uptown.

From its founding on May 25, 1982 to April 1988, the Consulate-General of Indonesia in Houston was located in Post Oak Central in Uptown. The Consulate-General of Egypt in Houston was located in Suite 1750 at 2000 West Loop South and later in Suite 2180 in Post Oak Central. As of 2008 the consulate is now at 5718 Westheimer Road, outside of Uptown. 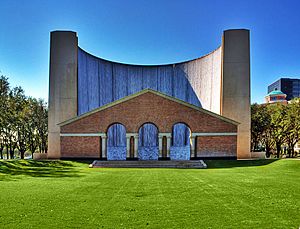 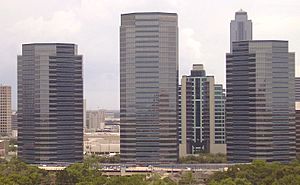 Three of the four buildings of Four Oaks Place 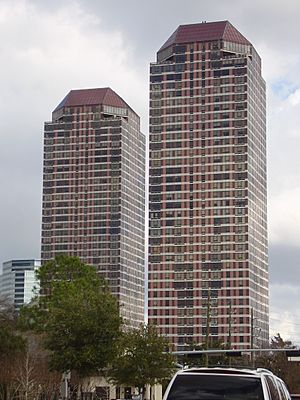 The Uptown District boomed along with Houston during the 1970s and early 1980s. A collection of mid-rise office buildings appeared along the Interstate 610 west (or simply "West Loop"). It became one of the most impressive instances of the edge city. The highest achievement of Uptown was the construction of the 901-foot-tall (275 m) landmark Williams Tower, designed by Philip Johnson (known as the Transco Tower until 1999). At the time, it was believed to be the world's tallest skyscraper outside of a central business district. The Williams Tower was the product of a unique era in Houston: energy companies were highly profitable entities and they sought impressive, monumental structures to broadcast their power.

The Williams Waterwall is a multi-story sculptural fountain which sits at the south end of Williams Tower in Uptown. It and its surrounding park were built as an architectural amenity to the adjacent tower. Both the fountain and tower were designed by Pritzker Prize winning architect Philip Johnson. Construction of the complex was completed in 1983. The semi-circular fountain is 64 feet (20 m) tall and sits among 118 Texas Live Oak trees. Approximately 11,000 US gallons (42,000 l; 9,200 imp gal) of water flow over both sides of the wall every minute. The Uptown District is also home to other buildings designed by noted architects such as I. M. Pei and César Pelli among others also designed by Philip Johnson; Pelli designed the Four Oaks Place complex. Large-scale office construction in Uptown came to an end with the collapse of energy prices and the meltdown of Houston's economy in the mid-to-late 1980s. Uptown had 23.8 million square feet (2,210,000 m2) of office space in 2001, whereas Downtown Houston had about 40 million square feet (4,000,000 m2). In the late 1990s, there was a mini-boom of mid-rise residential tower construction, typically about 30 stories tall. Uptown has accumulated a large concentration of high-rise residential structures.

The City of Houston announced in December 2008 that it would purchase the Williams Tower Park and Fountain from Hines REIT for approximately $8.5 million. The City will operate the site as a public park protecting the popular park and landmark waterwall fountain from the threat of future development. Hines and the city will share maintenance and upkeep costs of the park and fountain.

In addition the City of Houston operates the Post Oak Park at the intersection of Post Oak Drive and the 610 Loop.

In 2007 the city seized land from James and Jock Collins via eminent domain in order to widen San Felipe and convert the rest into a park. The city planned to build the Post Oak Lane Park, a 0.09-acre (0.036 ha) pocket park in Uptown. The pocket park is so small that it will not have a basketball court. City of Houston officials, including the Mayor of Houston Bill White and the Houston City Council, said that there was a public need for the park. The City of Houston operates the 4.7-acre (1.9 ha) Grady Park, which is located outside of Uptown and two blocks away from the site of the Post Oak Lane Park.

According to Carolyn Feibel and Bradley Olson of the Houston Chronicle, the Houston Chronicle obtained documents that show that the city eminent domain helped Ed Wulfe, the developer of the BLVD Place complex adjacent to the park, complete a $12.5 million land sale related to the development. Wulfe was a major donor to White. As of December 2008 the city had not created any plans for the Post Oak Lane Park. Houston Parks and Recreation Director Joe Turner said in a sworn disposition in November 2008 that his department did not create the idea of the park and that he opposed the usage of eminent domain. The Collins brothers said that the city government had used eminent domain to seize land only for the purposes of private development, which is not legal in Texas.

On December 8 2006, the Uptown District and the Texas Department of Transportation opened the Hidalgo Park, located south of the Galleria. The 3-acre (1.2 ha) park, previously a vacant plot of land, has 650 trees and shrubs and 240,000 square feet (22,000 m2) of sod. The park includes a pond with a lighted fountain; the fountain was first activated on the day of the park's opening. 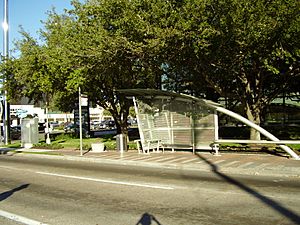 METRORail expansion plans include the Uptown/Gold Line which will serve the Uptown Houston area and run primarily down the median strip of Post Oak Boulevard. In 2010, Houston Mayor Annise Parker announced that there were no available funds to construct the rail line, although it still remains in METRO's future expansion plans. In 2013, it was announced that the line will be constructed initially as a bus rapid transit line, but with the capability to convert to light rail in the future. The bus rapid transit line could be functioning as early as 2017.

All content from Kiddle encyclopedia articles (including the article images and facts) can be freely used under Attribution-ShareAlike license, unless stated otherwise. Cite this article:
Uptown Houston Facts for Kids. Kiddle Encyclopedia.