Stafford is a city in the U.S. state of Texas, within the Houston–The Woodlands–Sugar Land metropolitan area. The city is mostly in Fort Bend County, with a small portion in Harris County. As of the 2010 census, Stafford's population was 17,693, up from 15,681 at the 2000 census. As of 2015 the population had risen to an estimated 18,459.

The climate in this area is characterized by hot, humid summers and generally mild to cool winters. According to the Köppen Climate Classification system, Stafford has a humid subtropical climate, Cfa on climate maps.

The city of Stafford has several areas of extraterritorial jurisdiction. Two ETJ areas are within the Houston Independent School District, including an area at Beltway 8 and Stafford Road and another area between Beltway 8 and Murphy Road. One ETJ area within the Alief Independent School District is next to the City of Meadows Place along Interstate 69/U.S. Route 59. Areas in the Fort Bend Independent School District include a portion of the Fifth Street and an area around U.S. Route 90 Alternate, Dulles Avenue, and Avenue E. The City of Stafford has avoided annexing these areas, because doing so would give it territory in school districts other than the Stafford Municipal School District (SMSD) and the city wants its city limits and the SMSD to have the same area. The SMSD cannot annex these areas without the permission of the other school districts.

There were 6,750 households out of which 33.2% had children under the age of 18 living with them, 45.1% were married couples living together, 16.3% had a female householder with no husband present, and 33.6% were non-families. 27.9% of all households were made up of individuals living alone, and 4.8% of individuals living alone were 65 years of age or older. The average household size was 2.62 and the average family size was 3.25. 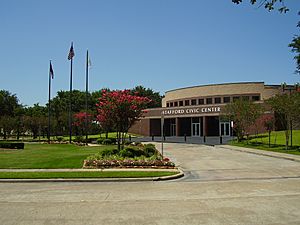 All content from Kiddle encyclopedia articles (including the article images and facts) can be freely used under Attribution-ShareAlike license, unless stated otherwise. Cite this article:
Stafford, Texas Facts for Kids. Kiddle Encyclopedia.