Tomball ( TOM-bawl) is a city in Harris County in the U.S. state of Texas, a part of the Houston metropolitan area. The population was 10,753 at the 2010 U.S. census and 11,778 in 2019. In 1907, the community of Peck was renamed Tomball for local congressman Thomas Henry Ball, who had a major role in the development of the Port of Houston. 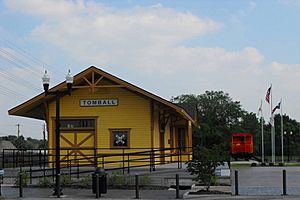 Settlement began in the Tomball area in the early 19th century, where settlers found an open, fertile land that received adequate rainfall—perfect conditions for farming and raising cattle. It was on a land granted in 1838 to William Hurd's heirs. In 1906 the area began to boom. Railroad line engineers often noticed that the Tomball area was on the boundary between the low hills of Texas and the flat coastal plains of the Gulf, making it an ideal location for a train stop. The railroad could load more cargo on each car, because the topography gently sloped toward the Galveston ports and provided an easier downhill coast. Thomas Henry Ball, an attorney for the Trinity and Brazos Valley Railroad, convinced the railroad to run the line right through downtown Tomball. Soon after, people came in droves to this new train stop. Hotels, boarding houses, saloons, and mercantile stores all began to spring up in the area. At first, people called the area Peck, after a chief civil engineer of the railroad line. However, on December 2, 1907, the town was officially named Tom Ball, later to be shortened to one word, for Mr. Ball.

While the boom of the railroad lasted less than a decade, the oil and gas industry began to leave its mark on the area. Oil probe instruments often indicated that oil was just underneath Tomball, especially after the Spindletop gusher in Beaumont. Although early exploration came up dry, the town remained a frenzy of activity for those who dreamed of oil. Undaunted by the challenges, the persevering spirit of Tomball's citizens proved rewarding when a drill hit a 100-foot (30 m) gusher of oil on May 27, 1933. Tomball, which people began to call "a floating island of oil", was immediately flooded with over two dozen oil companies, which drew thousands of workers and boosted the economy like never before. One major player, the Humble Oil Company, struck a deal with the town through which they would provide gas free of charge to the residents in exchange for rights to drill on the land. This agreement lasted until 1988, when the reservoirs began to be depleted.

Tomball incorporated in 1933. Because of the 1933 incorporation, Houston did not incorporate Tomball's territory into its city limits.

Tomball continued to grow over the years and hit its second major boom after World War II. People began to desire a more comfortable life, so the entire area saw a shift of Texans migrating from the "big city" to the countryside. In Tomball, people could escape some of the disagreeable qualities of the city, like high taxes, traffic, and crime, but still enjoy the closeness of jobs, culture, and entertainment. In the 1970s, Tomball's population again soared. The entire "Sun Belt" experienced a huge influx of residents who desired the affordable land and housing, nice weather, low taxes, and abundant job opportunities. Over the next 20 years, Tomball's population would increase from 16,000 people in the school district area to over 85,000 residents.

The climate in this area is characterized by hot, humid summers and generally mild to cool winters. According to the Köppen Climate Classification system, Tomball has a humid subtropical climate, abbreviated "Cfa" on climate maps. 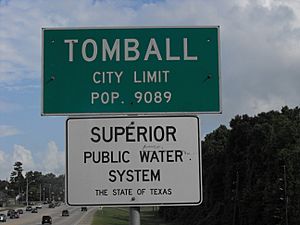 The city of Tomball is primarily served by FM 2920 (Main Street) east to west and State Highway 249 (Tomball Parkway) north to south.

David Wayne Hooks Memorial Airport, a general aviation airport, is located outside of the Tomball city limits in northwest Harris County. On June 27, 2007, the Texas State Legislature approved Tomball's request to annex Hooks Airport even though the airport does not border the Tomball city limits. Since the airport is in the city of Houston's extraterritorial jurisdiction, the city of Tomball had to get permission from Houston to annex the airport. 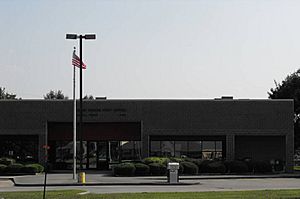 Pupils who live in Tomball attend schools in the Tomball Independent School District.

In 2019, the Texas Education Agency released the 2018-2019 accountability ratings for school districts across the state and Tomball ISD earned an overall "A" rating. TISD earned 92 of 100 possible points overall.

Concordia Lutheran High School (9–12) is a private school in Tomball.

St. Anne Catholic School is a Pre-K–8 Catholic school of the Roman Catholic Archdiocese of Galveston-Houston. Established in 1984, it originally held its classes at St. Anne Church; that year it had 16 Kindergarten students and 13 first grade students. It had had 380 students in 2015. That year Joseph Noonan became the principal.

Other private schools in the greater Tomball area include Rosehill Christian School (K–12), Salem Lutheran School, Cypress Christian School (K–12), and Great Oak School a Waldorf School (Pre-K–8). Cypress Christian, established in 1978, originally held its classes at Cypress Bible Church. It now has over 650 students. In 2018, Dr. Jeffery Potts joined CCS as Head of School. Dr. Potts was on the news for creating a School Marshall Program, where he armed teachers with guns at his previous school.

A branch of the Harris County Public Library, located in Tomball College, is a joint project between the college and HCPL.

All content from Kiddle encyclopedia articles (including the article images and facts) can be freely used under Attribution-ShareAlike license, unless stated otherwise. Cite this article:
Tomball, Texas Facts for Kids. Kiddle Encyclopedia.