The Ambassador Hotel was a hotel in Los Angeles, California. Designed by architect Myron Hunt, the Ambassador Hotel formally opened to the public on January 1, 1921. With its Mediterranean styling, tile floors, Italian stone fireplaces and semi-tropical courtyard, the Ambassador enchanted guests for over six decades. Later renovations by architect Paul Williams were made to the hotel in the late 1940s. It was also home to the Cocoanut Grove nightclub, Los Angeles’ premier night spot for decades; host to six Oscar ceremonies and to every United States President from Herbert Hoover to Richard Nixon.

Prominent figures such as Frank Sinatra, Judy Garland, Nat King Cole, Barbra Streisand, Bing Crosby, John Wayne, Lucille Ball, Marilyn Monroe, and The Supremes were some of the many entertainers that attended and performed professionally at the Cocoanut Grove.

The hotel was the site of the assassination of United States Senator Robert F. Kennedy on June 5, 1968. Due to the decline of the hotel and the surrounding area, the Ambassador Hotel was closed to guests in 1989. In 2001, the Los Angeles Unified School District (LAUSD) purchased the property with the intent of constructing three new schools within the area. After subsequent litigations to preserve the hotel as a historic site, a settlement allowed the Ambassador Hotel to be demolished in 2005. 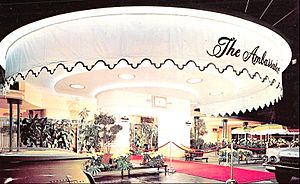 Entrance of the Ambassador Hotel, 1970. 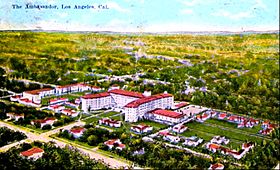 Early postcard of the Ambassador Hotel in March 1921.

Designed by American architect Myron Hunt, the Ambassador Hotel opened for business at the stroke of midnight on January 1, 1921, and quickly established a new standard of hotel luxury. Guests were greeted by a grand lobby upon arrival, with an oversized Italian fireplace, crystal chandeliers, oriental carpets and luxurious draperies adorning the lobby, along with a choice of 1,000 guestrooms and bungalows. The hotel occupied 23.7 acres at 3400 Wilshire Boulevard, bordered by Wilshire Boulevard at the north, 8th Street at the south, Catalina Street at the east, and nearly to Mariposa Avenue at the west. When the hotel's Cocoanut Grove nightclub opened on April 21, 1921, it had officially solidified the hotel's social scene. In the 1980 book, Are the Stars Out Tonight?, former Ambassador PR Director, Margaret Tante Burk, recalls the Grove's opening night:

…on the night of April 21, 1921… the new club officially opened its Moroccan style, gold leaf and etched palm tree doors... The Cocoanut Grove was aptly named, guests agreed as they were escorted by the maître de and captains down the wide plush grand staircase... Overhead, soaring about the room were cocoanut trees of papier mache, cocoanuts and palm fronds which had been rescued from the sandy beaches of Oxnard where they had served as atmosphere of the 1921 classic, The Sheik. Swinging from their branches were stuffed monkeys blinking at the revelers with their electrified amber eyes. Stars twinkled in the blue ceiling sky, and on the southernmost wall hung a full Hawaiian moon presiding over a painted landscape and splashing waterfall. 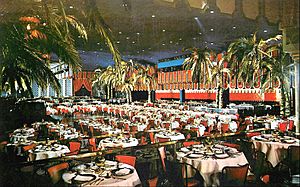 The Cocoanut Grove was frequented by celebrities such as Louis B. Mayer, Charlie Chaplin, Douglas Fairbanks, Mary Pickford, Howard Hughes, Clara Bow, Rudolph Valentino, Gloria Swanson, Anna May Wong, Norma Talmadge and others. According to Photoplay, Joan Crawford and Carole Lombard were frequent competitors in the Charleston contests held on Friday nights; Lombard was discovered at the Grove. The famous artificial palm trees that adorned the Cocoanut Grove were left from Rudolph Valentino's 1921 silent romantic drama film The Sheik. The names of the hotel and its nightclub quickly became synonymous with glamour. As a result, “Cocoanut Grove" would become a trendy name for bars and clubs across the United States.

Beginning in 1928, Gus Arnheim led the Cocoanut Grove Orchestra, in which six to seven songs were sung each night. At one point, there was a two-hour broadcast of the orchestra on radio. By the 1930s, the Cocoanut Grove was frequented by cinema stars like Norma Shearer, Irving Thalberg, Clark Gable, Katharine Hepburn, Spencer Tracy, Cary Grant, John Wayne, Henry Fonda, Loretta Young, Lucille Ball, Ginger Rogers and countless others. On February 29, 1940, the 1939 Academy Awards Ceremony was held in the Cocoanut Grove, with Bob Hope hosting the awards.

During World War II, servicemen from the U.S. military mingled with movie stars at the hotel during numerous galas and fundraising events to help with war efforts.

Loyce Whiteman, singer for the Cocoanut Grove Orchestra, recalled, "the most beautiful thing about the Grove is that they stood in front of you when you sang and just swayed to the music. Joan Crawford would stand at the stand and sing a couple of choruses with the band. It was a house full of stars."

On June 5, 1968, the winner of the California Democratic presidential primary election, United States Senator Robert F. Kennedy, was addressing a speech at the Ambassador Hotel to an excited crowd of hopeful supporters. After the brief victory speech in the Embassy Room, Kennedy was shot three times along with five other people in the pantry area of the hotel's main kitchen soon after midnight. Palestinian immigrant Sirhan Sirhan was arrested at the scene and later convicted of the murder. Kennedy died the following day due to his injuries, while the other victims survived from their wounds at Good Samaritan Hospital. The section of Wilshire Boulevard in front of the hotel has been signed the "Robert F. Kennedy Parkway".

The death of Robert F. Kennedy marked the demise of the hotel coinciding with the decline of the surrounding neighborhood during the late 1960s and 1970s. Under the direction of Sammy Davis, Jr., the “Now Grove” replaced the classic Cocoanut Grove in 1970 in order to appeal to a modern nightclub crowd. However, patrons lost interest in both the hotel and the neighborhood surrounding it, which caused the Ambassador Hotel to fall into disrepair throughout the years. Because of this the Ambassador Hotel closed to guests in 1989, but it remained opened for filming and hosting private events. In 1991, Donald Trump, who had bought the hotel in hopes of tearing it down to build a 125-story building, sold off silver serving platters with the hotel's eagle-topped crest, tiki-style soup bowls from the famed Cocoanut Grove nightclub, and beds and nightstands from the rooms.

From 2004 and 2005, the Ambassador Hotel became the topic of a legal struggle between the Los Angeles Unified School District (LAUSD), which planned to clear the site and construct a school on the property, and the Los Angeles Conservancy and the Art Deco Society of Los Angeles, who wanted the hotel and its various elements preserved and integrated into the future school.

The Location Managers Guild organized an event together with the Jefferson High School Academy of Film and Television in March 2005, entitled Last Looks: The Ambassador Hotel. They mentored students in script breakdown and location scouting, using the hotel as a potential location to be scouted, documenting the property one last time. The images taken by both the students and the professionals were then exhibited side by side at Los Angeles City Hall.

After much litigation, a settlement was attained at the end of August 2005, allowing the demolition to begin in exchange for the establishment of a $4.9 million fund, reserved for saving historic school buildings in the Los Angeles Unified School District. 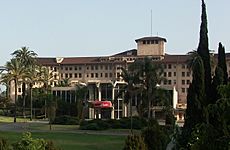 The Ambassador Hotel in 2004, a year before demolition began on site.

On September 10, 2005, a final public auction was held for the remaining fittings in the hotel's parking lot, with demolition commencing soon afterwards. On January 16, 2006, the last section of the Ambassador Hotel fell, leaving only the annex that housed the hotel's entrance, shopping arcade, coffee shop, and the Cocoanut Grove, which were promised to be preserved in some manner and integrated within the new school.

A wake attended by hundreds of people was held for the Ambassador Hotel on February 2, 2006 at the Gaylord Apartments and adjoining restaurant H.M.S. Bounty, both part of a historic building built during 1924, directly across the street from the Ambassador Hotel. Diane Keaton, who was one of many who fought for the preservation of the hotel, was among the speakers of the ceremony.

The Cocoanut Grove was renovated several times before, destroying much of its architectural integrity, and it was promised that it would undergo yet another major transformation before becoming the auditorium for the new school. Also promised was preservation of the attached ground floor coffee shop, designed by noted architect Paul Williams. Due to claims of poor structural integrity, however, the LAUSD decided to demolish most of the Cocoanut Grove, retaining only the hotel entrance and east wall of the Grove.

The six schools were named as the Robert F. Kennedy Community Schools. The K–3 facility opened on September 9, 2009 and the 4–8 and high school facility began operation on September 14, 2010. The north side of the new school has a slightly similar appearance to the original facade of the hotel and north lawns will remain much the same, as seen from Wilshire Boulevard.

The Ambassador Hotel was a popular filming location and backdrop for movies and television programs, starting with Jean Harlow's 1933 film Bombshell. An early MGM color short film, Starlit Days at the Lido (1935), was filmed in the Lido Spa at the Ambassador Hotel, of a lunchtime tea dance featuring the Henry Busse band and vocalists, novelty acts with Arthur Lake, Cliff Edwards and Ben Turpin, with chorus girls and reaction shots of "guests", including Francis Lederer, Buster Crabbe, John Boles and MC Reginald Denny.

Throughout the 1980s and early 2000s, the hotel would be used in several movies and television shows such as Forrest Gump, Murder, She Wrote, Beverly Hills 90210, S.W.A.T., The Italian Job, Blow, Mafia!, and much more. This is due to the fact that the hotel had various rooms that could be conveniently utilized in filming, while also not having to deal with hotel guests or disturbing other people. Due to its time capsule environment, it was a perfect location to represent any 1950s through 1970s period hotels, as in Almost Famous, Apollo 13, Catch Me If You Can, Hoffa, and That Thing You Do.

The interactive movie/game based on the 1995 film "Johnny Mnemonic" was filmed here with a $3 million budget.

The last project to specifically film in the infamous kitchen was "Spin the Bottle", a 2004 episode of the TV series Angel. The 2006 film Bobby was the last project to physically film on the hotel property, gaining access in late 2005 to film crucial establishing shots even while portions of the hotel were already in the process of being demolished.

In addition, the Ambassador itself has been memorialized as a "character" in films. The Cocoanut Grove was recreated for the 2004 movie The Aviator, while the 1999 film The Thirteenth Floor recreates the hotel when the main characters visit 1937 Los Angeles.

The Cocoanut Grove hosted musician Roy Orbison and several performers in September1988. Rock band Linkin Park held their press photo shoot for their 2003 album Meteora at the hotel. Guns N' Roses filmed the music video for their song, "Patience", in the hotel in 1989. R&B singer Chuckii Booker filmed the music video for his song "Games" from the album Niice 'n Wiild at the hotel in 1992. The hotel also served as the filming location for the music video of the 1997 Marilyn Manson single "Long Hard Road Out of Hell" off the soundtrack for the Todd McFarlane motion picture Spawn. Rock band 311 used the lobby of hotel as the backdrop for a photo shoot of the album cover of their 2003 album Evolver.

A feature-length documentary film by Camilo Silva, After 68: The Rise and Fall of the Ambassador Hotel, is being made with an estimated release date in 2014. In a 2013 interview Silva reported that the film was "about half" shot.

All content from Kiddle encyclopedia articles (including the article images and facts) can be freely used under Attribution-ShareAlike license, unless stated otherwise. Cite this article:
Ambassador Hotel (Los Angeles) Facts for Kids. Kiddle Encyclopedia.