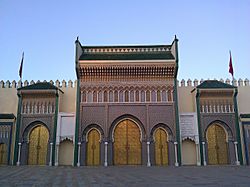 Islamic Architecture in the Royal Palace in Fes.

Moroccan architecture includes various structures built during different time periods. from the first Berberians settlers from the south and through the Arab invastion from the east and the European conquest that came from the north. The most notable style in this country is the Berberian Architecture that existed initially, followed by the style of local Islamic architecture that shaped the local style that came after the Arabs entered.

All content from Kiddle encyclopedia articles (including the article images and facts) can be freely used under Attribution-ShareAlike license, unless stated otherwise. Cite this article:
Moroccan architecture Facts for Kids. Kiddle Encyclopedia.