Aït Benhaddou (Berber languages: ⴰⵢⵜ ⴱⴻⵏⵃⴰⴷⴷⵓcode: ber is deprecated ; Arabic: آيت بن حدّو‎code: ar is deprecated ) is a historic ighrem or ksar (fortified village) along the former caravan route between the Sahara and Marrakech in present-day Morocco. It is considered a great example of Moroccan earthen clay architecture and has been a UNESCO World Heritage Site since 1987. 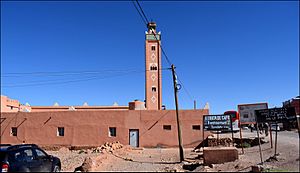 Mosque in the modern village where most residents now live, across the valley from the old ksar

The site of the ksar has been fortified since the 11th century during the Almoravid period. None of the current buildings are believed to date from before the 17th century, but they were likely built with the same construction methods and designs as had been used for centuries before. The site's strategic importance was due to its location in the Ounila Valley along one of the main trans-Saharan trade routes. The Tizi n'Tichka pass, which was reached via this route, was one of the few routes across the Atlas Mountains, crossing between Marrakech and the Dra'a Valley on the edge of the Sahara. Other kasbahs and ksour were located all along this route, such as the nearby Tamdaght to the north.

Today, the ksar itself is only sparsely inhabited by several families. The depopulation over time is a result of the valley's loss of strategic importance in the 20th century. Most local inhabitants now live in modern dwellings in the village on the other side of the river, and make a living off agriculture and especially off the tourist trade. 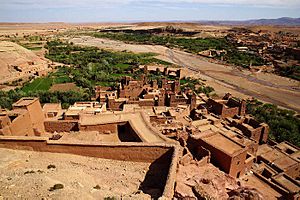 View of the ksar from above 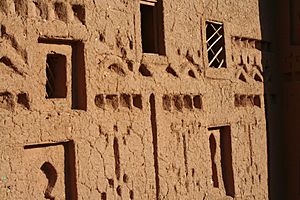 Layout of the site

The ksar is located on the slopes of a hill next to the Ounila River (Asif Ounila). The village's buildings are grouped together within a defensive wall that includes corner towers and a gate. They include dwellings of various size ranging from modest houses to tall structures with towers. Some of the buildings are decorated in their upper parts with geometric motifs. The village also has a number of public or community buildings such as a mosque, a caravanserai, a kasbah (castle-like fortification) and the Marabout of Sidi Ali or Amer. At the top of the hill, overlooking the ksar, are the remains of a large fortified granary (agadir). There is also a public square, a Muslim cemetery, and a Jewish cemetery. Outside the ksar's walls was an area where grain was grown and threshed.

The ksar's structures are made entirely out of rammed earth, clay bricks, and wood. Rammed earth (also known as pisé, tabia, or al-luh) was a highly practical and cost-effective material but required consistent maintenance. It was made of compressed earth and mud, usually mixed with other materials to aid adhesion. The structures of Ait Benhaddou and of other kasbahs and ksour throughout this region of Morocco typically employed a mixture of earth and straw, which was relatively permeable and easily eroded by rain over time. As a result, villages of this type can begin to crumble only a few decades after being abandoned.

The ksar has been significantly restored in modern times, thanks in part to its use as a Hollywood filming location and to its inscription on the UNESCO list of World Heritage Sites in 1987. UNESCO reports that the ksar has "preserved its architectural authenticity with regard to configuration and materials" by continuing to use traditional construction materials and techniques and by largely avoiding new concrete constructions. A local committee is in charge of monitoring and managing the site. 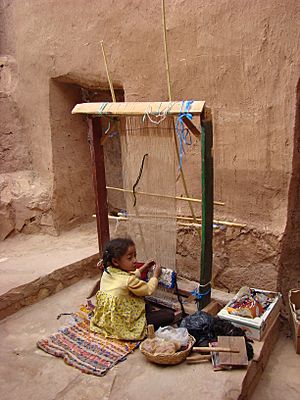 Young girl working on a loom in Aït Benhaddou, in May 2008

A large number of films shot in Morocco have used Aït Benhaddou as a location, including:

Also used in parts of the TV series Game of Thrones and the Brazilian TV series O Clone.

All content from Kiddle encyclopedia articles (including the article images and facts) can be freely used under Attribution-ShareAlike license, unless stated otherwise. Cite this article:
Aït Benhaddou Facts for Kids. Kiddle Encyclopedia.