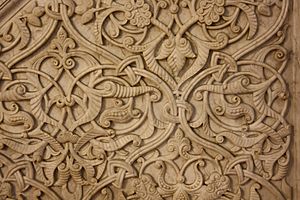 Stone relief with arabesques in the Umayyad Mosque, Damascus 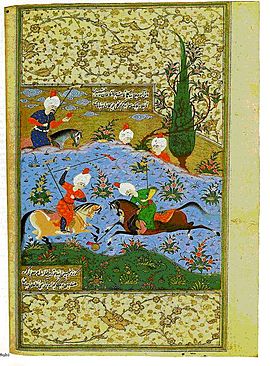 Arabesque is an artistic decoration. It uses "surface decorations based on... interlacing foliage, tendrils" or plain lines. Another definition is "Foliate ornament, used in the Islamic world, typically using leaves... combined with spiralling stems".

Arabesques are usually of a single design which can be 'tiled' or repeated as many times as desired.

The term "arabesque" is used as a technical term by art historians for decoration in Islamic art from about the 9th century onwards, and European decorative art from the Renaissance onwards. Note that Islamic geometric patterns are a different style from arabesques. 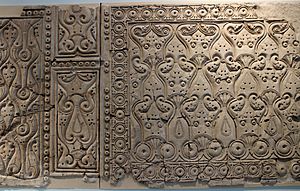 All content from Kiddle encyclopedia articles (including the article images and facts) can be freely used under Attribution-ShareAlike license, unless stated otherwise. Cite this article:
Arabesque Facts for Kids. Kiddle Encyclopedia.