In 1935 Boeing designed an airliner with four engines. It was based on the Boeing B-17 Flying Fortress. This airliner was called the Model 307. It had the same wings, tail, rudder, landing gear and engines as the B-17C. However, the middle of the plane was a circle. Its diameter was 138 in (351 cm). It was designed so that the plane could be pressurized.

The first order was made in 1937 by Pan American Airways. Pan Am then ordered more. Transcontinental & Western Air (TWA) ordered five. Boeing then started making the plane.

When the U.S. joined World War II in December 1941, it was thought to be a luxury to fly. The war meant that government and military officers needed to fly long distances. Planes like Pan Am's 14 flying boats and TWA's five Boeing 307s were used for this. More fuel tanks were added to allow it to fly further. Military Boeing 307s were called C-75s. Before World War II stopped them being made, 10 307s had been made for airlines. TWA flew between New York and Los Angeles for 18 months until the Army bought their planes. TWA changed their 307s to C-75s in January 1942. These were the only American planes which could cross the Atlantic with cargo until the Douglas C-54 Skymaster was made in November 1942.

The first delivery was made to Howard Hughes. He bought one Boeing 307 to fly around the world. He wanted to do it faster than he did before. Hughes' Boeing Stratoliner had more fuel tanks. It was ready to go, but then Nazi Germany invaded Poland on September 1, 1939, so Howard Hughes did not make his flight. This 307 had its extra fuel tanks taken off. It also had more powerful engines added. It was supposed to be a "flying penthouse" for Hughes, but it was not used a lot. It was eventually sold.

Pam Am started getting its Boeing 307s in March 1940. TWA got its first 307 in April. TWA used its 307s to fly from Los Angeles to New York. Pan Am's flew from Miami to Latin America. Ten 307s were made. Three were given to Pan Am (named Clipper Flying Cloud, Clipper Comet, and Clipper Rainbow) and five to TWA (named Comanche, Cherokee, Zuni, Navajo, and Apache). One went to Howard Hughes. The first 307 crashed.

The U. S. Army gave the five C-75s back to TWA in 1944. TWA sent them back to Boeing to be rebuilt. Boeing replaced the wings and put in more powerful engines. The electrics were replaced with electrics from the Boeing B-29 Superfortress. After these changes, the 307 could carry 38 passengers. TWA switched to the Lockheed Constellation, but the 307s were used until April, 1951. 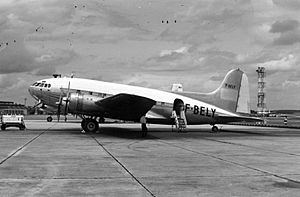 An Aigle Azur Stratoliner at Paya Lebar in 1967

The C-75 flew two main routes: Washington, D.C. to Cairo and New York to Scotland. They sometimes flew from Gander, Newfoundland to Prestwick, Scotland and between Natal, Brazil and Accra, Ghana. After July 1942, they could stop to refuel at Ascension Island. I 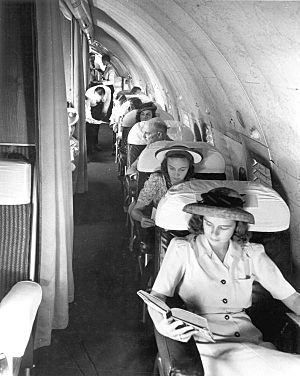 Passengers on a Pan Am Boeing 307 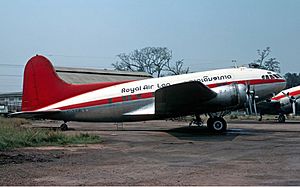 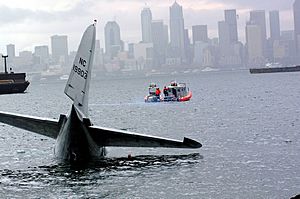 The only Boeing 307 Stratoliner which still exists is at the Smithsonian Museum's Steven F. Udvar-Hazy Center. On March 28, 2002, this plane was damaged a lot when it ditched in Elliott Bay in Seattle, Washington. That was its last flight before it went to the Smithsonian.

The main part of Howard Hughes' 307 also still exists, but it is now a house boat.

Data from Jane's AWA 1942 (apart from wing area and loading)

All content from Kiddle encyclopedia articles (including the article images and facts) can be freely used under Attribution-ShareAlike license, unless stated otherwise. Cite this article:
Boeing 307 Facts for Kids. Kiddle Encyclopedia.