The Ascension Island is named after the day of its recorded discovery, Ascension Day. It is part of the British Overseas Territory of Saint Helena, Ascension and Tristan da Cunha, of which the main island is St Helena.

The island is the location of a Royal Air Force station with a United States Air Force presence, a European Space Agency station and the BBC World Service Atlantic Relay Station. There is in the island one antenna of the five that assist in the operation of the Global Positioning System (GPS) navigational system (others are on Kwajalein Island, Diego Garcia, Colorado Springs and Hawaii).

The Galician explorer João da Nova, working for Portugal, saw the Ascension island in the South Atlantic in 1501, when he was going to India; named it ilha da Conceição (Conception Island). En 1503 when the Portuguese navigator Afonso de Albuquerque saw the island on Ascension Day, in the church calendar, he named it after the feast day.

Organised settlement of Ascension Island began in 1815, when the British sent soldiers to the island as a precaution after imprisoning Napoleon I on Saint Helena to the southeast.

In 1836, Charles Darwin visited the Saint Helena and Ascension islands during his voyage in the Beagle. He described Ascension as an arid treeless island, with nothing growing near the coast. Sparse vegetation inland supported "about six hundred sheep, many goats, a few cows & horses", and large numbers of guineafowl imported from the Cape Verde islands, as well as rats, mice and land crabs.

In 1843, botanist and explorer Joseph Hooker visited the island. Four years later, Hooker advised the Royal Navy that with the help of Kew Gardens, they should develop a long-term plan of shipping trees to Ascension. So, from 1850 and continuing year on year, ships came each with different plants from botanical gardens in Argentina, Europe and South Africa. By the late 1870s Norfolk pines, eucalyptus, bamboo, and banana trees grew at the highest point of the island, Green Mountain, creating a tropical forest covered with clouds.

In 1899, the Eastern Telegraph Company (now part of Vodafone) installed the first underwater cable from the island, connecting the UK with its colonies in South Africa. In 1922, the Ascension island was made a dependency of Saint Helena. The island was managed by the head of the Eastern Telegraph Company on the island until 1964 when the British Government appointed an Administrator to represent the Governor of Saint Helena on Ascension.

In 1981, the British government changed the status of Saint Helena and the other Crown colonies to "British Dependent Territories". 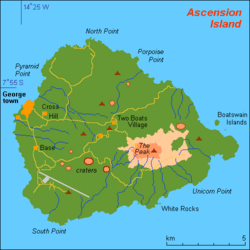 The island is roughly triangular in plan, about 13 km across, with an area of 88 km2 (34 sq mi), and has about 100 km of coastline. While the west and north-west coasts have sandy beaches, the south and southeast coasts form steep cliffs.

There are several small islands (islets) and rocks surrounding the Ascension Island; the largest is Boatswainbird Island, 305 m (1,001 ft) north of the eastern part of the island.

Ascension island has a tropical but oceanic climate, with little changes from one season to another. The island is in the path of the South-East Trade Winds, and southeast and easterly winds blow for more than half of every month.

The Köppen climate classification subtype for this climate is Am (Tropical Monsoon Climate). 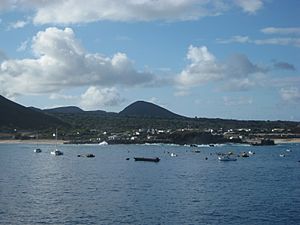 Georgetown is the primary settlement on the island.

The human population is about 1,000, made up of civilians working for the RAF and USAF, and a small number of military personnel. The personnel are mainly from the UK, USA and St Helena, none of whom are permanent residents.

There are five settlements:

Two Boats School is the only school on the island and provides education to all resident children 3½–16 years old.

All content from Kiddle encyclopedia articles (including the article images and facts) can be freely used under Attribution-ShareAlike license, unless stated otherwise. Cite this article:
Ascension Island Facts for Kids. Kiddle Encyclopedia.