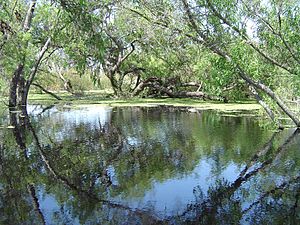 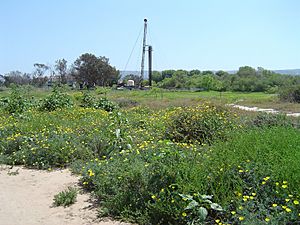 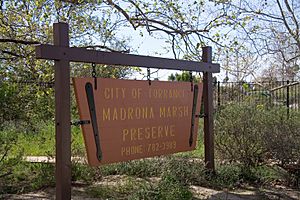 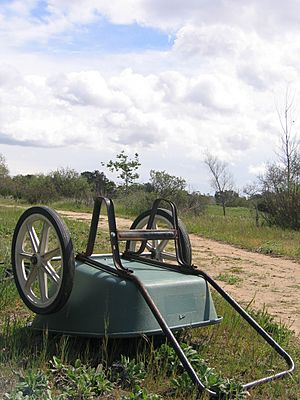 The Madrona Marsh Preserve, in the city of Torrance in the South Bay region of Southern California, is a seasonal wetland with vernal pools. The 43 acres (17 ha) was a former site of oil wells and is one of the few natural areas remaining within an urban landscape.

Formed eons ago when the mountains of the Palos Verdes Peninsula rose to the south, Madrona Marsh is a shallow depression fed by wet season (spring) storms as the name "vernal" indicates. After the rainy season, evaporation, percolation and transpiration reduce the water depth by about one-quarter of an inch (6 mm) per day. By the end of August, the wetland is dry and remains so until the following rainy season. Situated on land that was set aside for oil production in 1924, Madrona Marsh was never developed while the city grew up around the site and remains a valuable natural habitat for birds, reptiles, insects and small mammals.

Ongoing efforts are restoring native plants including wildflowers. Plantings may benefit local butterfly species including the Palos Verdes blue. The area has long been popular with bird watchers and The Audubon Society has used Madrona Marsh for their annual bird census since 1967. El Camino College uses it as an outdoor biology and botany lab.

The City of Torrance operates the Madrona Marsh Nature Center in cooperation with the Friends of the Madrona Marsh. Activities include bird and nature walks, natural history classes and workshops, habitat restoration, science and astronomy programs, art exhibits, and children's nature programs. The center opened in 2001 and features exhibits about the plants, birds and animals of the marsh. The nature center for the Preserve is across the street.

All content from Kiddle encyclopedia articles (including the article images and facts) can be freely used under Attribution-ShareAlike license, unless stated otherwise. Cite this article:
Madrona Marsh Facts for Kids. Kiddle Encyclopedia.