The Bay Area Ridge Trail (Ridge Trail) is a planned 550-mile (890 km) multi-use trail along the hill and mountain ridgelines ringing the San Francisco Bay Area, in Northern California. Currently over 380 miles (610 km) have been established. When complete, the trail will connect over 75 parks and open spaces. The trail is being designed to provide access for hikers, runners, mountain bicyclists, and equestrians. It will be accessible through trailheads near major population centers, while the trail will extend into more remote areas. The first trail section was dedicated on May 13, 1989.

William Penn Mott Jr., the twelfth director of the National Park Service, is credited with sparking the idea for the Ridge Trail in a speech he gave in March 1987 at a state parks and recreation conference. While working for the East Bay Regional Park District in the 1960s, Mott's office was on a ridgeline in the East Bay, and the views from the office inspired his vision of a hill-and-ridge trail encircling the Bay and linking its communities. The plan would later attract bipartisan support, with George Miller joining Mott.

In May 1987, the Greenbelt Alliance held a meeting to strategize how to approach the San Francisco Water Department and convince them to open their watershed lands to the public; Mark Evanoff convened the meeting and Brian O'Neill, Superintendent of the Golden Gate National Recreation Area, proposed a potential strategy to pursue the goals outlined in the report by the President's Commission on Americans Outdoors. Later that year, a planning committee was formed with membership from nearly 40 public agency, recreation groups, and individuals. Eventually, this committee became the Bay Area Ridge Trail Council.

Dinesh Desai, a retired engineer, and Bob Cowell, a retired fire chief, completed the first hike of the Ridge Trail in 1999, despite its incomplete status. The pair followed existing trails and planned alignment where no trails existed, including a crossing of the Carquinez Strait by kayak.

The first two segments of the trail, on lands in San Mateo County managed by the Midpeninsula Regional Open Space District and the San Mateo County Department of Parks, were dedicated on May 13, 1989. Existing trails in public open spaces were incorporated into the Ridge Trail, enabling it to reach 100 miles (160 km) by 1990 and 200 miles (320 km) by 1995.

As of 2020[update], the Ridge Trail stands at 383 miles (616 km) completed. The section of the trail that runs through San Francisco has been completed, and parts of the SF trail have been rerouted to pass through more green space and over Twin Peaks. Large sections of the trail through San Mateo, Marin, Contra Costa and Alameda counties have been completed. Much of the remaining mileage is on private property in Santa Clara, Sonoma, and Napa, and may require land acquisition and/or easements to expand the trail across these properties. 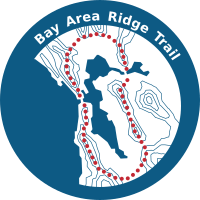 Starting at the Golden Gate Bridge and proceeding clockwise, the current and planned alignment of the Ridge Trail takes it through every Bay Area county: Marin, Sonoma, Napa, Solano, Contra Costa, Alameda, Santa Clara, Santa Cruz, San Mateo, and San Francisco counties. The planned alignment of the Ridge Trail extends as far north as Calistoga and Angwin, and as far south as Gilroy.

From south to north, the trail passes through:

The Bay Area Ridge Trail Council (BARTC), founded in 1987, is the organization working on the Ridge Trail. BARTC initially was supported by the Greenbelt Alliance, but incorporated in 1991 as a 501(c)(3) nonprofit under co-chairs Brian O'Neill and Marcia McNally. They partner with governments, nonprofit land trusts, and volunteer organizations in all nine Bay Area counties to help protect and preserve open space and plan, construct, and promote the Ridge Trail. The Council office is located in The Presidio, San Francisco.

All content from Kiddle encyclopedia articles (including the article images and facts) can be freely used under Attribution-ShareAlike license, unless stated otherwise. Cite this article:
Bay Area Ridge Trail Facts for Kids. Kiddle Encyclopedia.