Calistoga is a city in Napa County, California, United States. During the 2010 census, the population was 5,155. 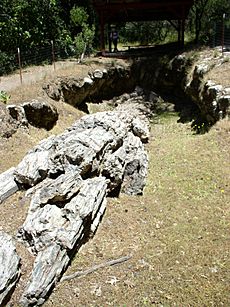 The Upper Napa Valley was once the home of a significant population of Indigenous People, called the Wappo during the Spanish colonial era of the late 18th century. With abundant oak trees providing acorns as a food staple and the natural hot springs as a healing ground Calistoga (Wappo: Nilektsonoma, "Chicken Hawk Place") was the site of several villages. Following Mexican Independence, mission properties were secularized and disposed of by the Mexican government with much of the Napa Valley being partitioned into large ranchos in the 1830s and 1840s. The first Anglo settlers began arriving in the 1840s, with several taking up lands in the Calistoga area.

Samuel Brannan was the leader of a settlement expedition on the ship Brooklyn landing in Yerba Buena (San Francisco) in 1846. He published San Francisco's first English language newspaper, the California Star. Following the discovery of gold in Coloma, Brannan pursued many business ventures, which made him California’s first millionaire and became a leader in San Francisco's Committee of Vigilance. Fascinated by Calistoga’s natural hot springs, Brannan purchased more than 2,000 acres (8 km2) with the intent to develop a spa reminiscent of Saratoga Springs in New York. He is said to have intended to say "I'll make this place the Saratoga of California," but to have in fact said "the Calistoga of Sarifornia". His Hot Springs Resort surrounding Mt Lincoln with the Spa/Hotel located at what is now Indian Springs Resort, opened to California's rich and famous in 1862. In 1868 Brannan's Napa Valley Railroad Company's track was completed to Calistoga. This provided an easier travel option for ferry passengers making the journey from San Francisco. With the addition of railroad service, Calistoga became not only a destination, but also the transportation hub for the upper valley and a gateway to Lake and Sonoma Counties. A 6-meter diorama of this early Calistoga can be seen in the Sharpsteen Museum. 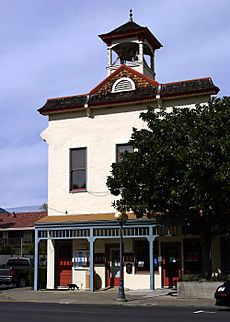 Calistoga's economy was based on mining (silver and mercury) agriculture (grapes, prunes and walnuts) and tourism (the hot springs). One of the early visitors was Robert Louis Stevenson. Yet to write his great novels, he had just married Fanny Vandegrift in San Francisco in May 1880, and the couple honeymooned at the Calistoga Hot Springs Hotel days later. Desiring to stay in the area, they moved from the hotel to an abandoned cabin at the nearby Silverado Mine on Mount Saint Helena. While working on other stories Stevenson kept a journal which became the Silverado Squatters describing many local features, residents and characters.

Calistoga made national headlines in 1881 when Anson Tichenor claimed that he had invented a way to extract gold from the waters of the hot springs. Tichenor's invention was soon proved to be a fraud.

In 1920, Giuseppe Musante, a soda fountain and candy store owner in Calistoga, was drilling for a cold water well at the Railway Exchange when he tapped into a hot water source. In 1924 he set up a bottling line and began selling Calistoga Sparkling Mineral Water. The company became a major player in the bottled water business after Elwood Sprenger bought the small bottling plant in 1970 known today as Calistoga Water Company.

Calistoga was named a Distinctive Destination by the National Trust for Historic Preservation in 2001.

Scenes from the Disney movie Bedtime Stories starring Adam Sandler were filmed in Calistoga in June 2008.

There were 2,042 households out of which 29.0% had children under the age of 18 living with them, 47.2% were married couples living together, 8.2% had a female householder with no husband present, and 39.1% were non-families. 31.4% of all households were made up of individuals and 17.1% had someone living alone who was 65 years of age or older. The average household size was 2.51 and the average family size was 3.20. 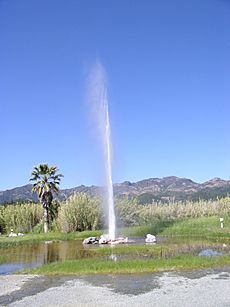 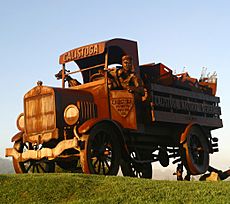 Calistoga is at the north end of the Napa Valley Calistoga AVA, part of California's Wine Country. There are numerous wineries within a short drive. The city allows visitors to see wine country as it was before freeways and fast food—only two-lane roads lead there and fast food franchises are banned by law.

Calistoga itself is noted for its hot springs spas such as Calistoga Spa Hot Springs. A local specialty is immersion in hot volcanic ash, known as a mud bath. Nearby attractions include an artificial geothermal geyser known as the "Old Faithful of California" or "Little Old Faithful". The geyser erupts from the casing of a well drilled in the late 19th century. According to Dr. John Rinehart in his book A Guide to Geyser Gazing (1976 p. 49), a man had drilled into the geyser in search for water. He had actually "simply opened up a dead geyser".

All content from Kiddle encyclopedia articles (including the article images and facts) can be freely used under Attribution-ShareAlike license, unless stated otherwise. Cite this article:
Calistoga, California Facts for Kids. Kiddle Encyclopedia.