Castello di Amorosa is a castle and a winery located near Calistoga, California. First opening its doors to the public in April 2007, the castle is the project of 4th generation vintner, Dario Sattui, who also owns and operates the V. Sattui Winery named after his great-grandfather, Vittorio Sattui, who originally established a winery in San Francisco in 1885 after emigrating from Italy to California.

The winery property was once part of an estate owned by Edward Turner Bale. In 1993, Sattui purchased 171 acres (69 ha) for $3.1 million, then spent another $40 million to construct the castle, outbuildings, and the winery inside the castle; construction work began in 1995.

Due to the Glass Fire that began on September 27, 2020, the farmhouse suffered major damage, the entire 2020 vintage of the wine Fantasia was lost, but the castle was left unharmed.

After graduating with an MBA from the University of California, Berkeley in 1969, Dario Sattui spent 2 years traveling around Europe in an old VW van, during which time he developed an interest in medieval architecture. He took photos and made sketches of various buildings he would visit including medieval castles, monasteries, palaces, farmhouses and wineries. 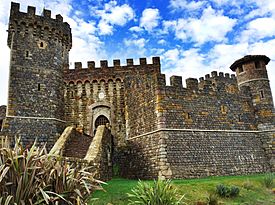 Key details and building techniques are architecturally faithful to the 12th and 13th century time period. Among many other features, it includes a moat; a drawbridge, defensive towers, an interior courtyard, a chapel/church, a knights' chamber, and a 72 by 30 feet (9.1 m) great hall with a 22-foot (6.7 m)-high coffered ceiling.

The great hall features frescoes painted by two Italian artists, who took about a year and a half to complete, and showcases a 500-year-old fireplace. 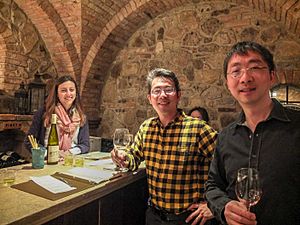 Wine tasting in the cellar

The masonry, ironwork, and woodwork were fashioned by hand using old world crafting techniques. Building materials included 8,000 tons of locally quarried stone, paving stones, terra cotta roofing tiles, and 850,000 bricks imported from Europe. Extending into the hillside adjacent to the castle is a labyrinth of caves some 900 feet (270 m) in length. Beneath the castle are a 2-acre (8,100 m2) barrel cellar and tasting rooms where visitors can sample the wines, all sold only at the Castle or through the winery's wine club.

Due to Napa County restrictions, the castle and grounds cannot be rented for weddings or receptions, but are available to rent for corporate gatherings and fund raisers. In May 2012 the county ordered the winery to cease holding a weekly Catholic Mass in the chapel located on the grounds due to lack of use permits.

All content from Kiddle encyclopedia articles (including the article images and facts) can be freely used under Attribution-ShareAlike license, unless stated otherwise. Cite this article:
Castello di Amorosa Facts for Kids. Kiddle Encyclopedia.