The indigenous Wappo civilization occupied the region for thousands of years and annually migrated to the upper valley to village near the exposed mineral pools found along the western ridge of the Mayacamas mountain range. Geothermal forces and tectonic activity elevate the temperature of the mineral water to 180 degrees Fahrenheit at the source.

A mud bath is a bath of mud, commonly from areas where hot springs water can combine with volcanic ash. The volcanic ash found in the upper Napa Valley is derived from the eruptions of Mount Konocti and Mount St. Helena ending some 10,000 years ago. Mud baths have existed for thousands of years and since ancient times have been used to treat health problems and beautify the skin.

Balneology or sometimes referred to as "taking in the waters" is an ancient method of gaining the benefits of mineral water through immersion, ingestion and contact with the water over a period of time. It is believed that the mineral content within the water, especially magnesium, initiates a calming effect on the user.

From 1965 through 1986 the property operated Calistoga's largest open to the public pool, the Roman Pool. Through vigorous use and age the pool fell into decline and was closed in 1985. Between 1965 and 1985 several new guest room buildings were added to the property to allow for more overnight visitors wanting to "take in the waters". 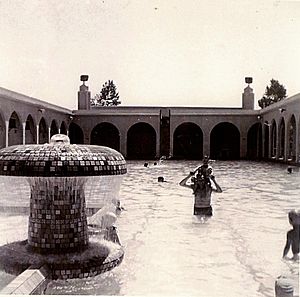 In 1986 a new main building was constructed to house the spa, mud bath and mineral bath facility. This building rests upon the space previously occupied by the Roman Pool. The pools and surrounding patio areas were improved and barbecue areas were created for guests to use during their visit.

All content from Kiddle encyclopedia articles (including the article images and facts) can be freely used under Attribution-ShareAlike license, unless stated otherwise. Cite this article:
Calistoga Spa Hot Springs Facts for Kids. Kiddle Encyclopedia.