The Carquinez Strait is a narrow tidal strait in Northern California. It is part of the tidal estuary of the Sacramento and the San Joaquin rivers as they drain into the San Francisco Bay. The strait is eight miles (13 km) long and connects Suisun Bay, which receives the waters of the combined rivers, with San Pablo Bay, a northern extension of the San Francisco Bay.

The strait formed in prehistoric times, near the close of one of the past ice ages, when an inland lake covered the present-day Sacramento and San Joaquin valleys. Melting ice from the Sierra Nevada mountain range raised the lake level while seismic activity formed a new outlet to the Pacific Ocean, draining the lake into the ocean and exposing the two valleys. 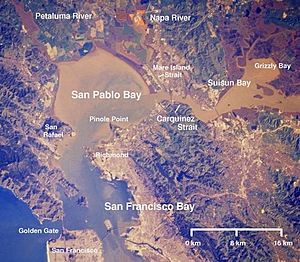 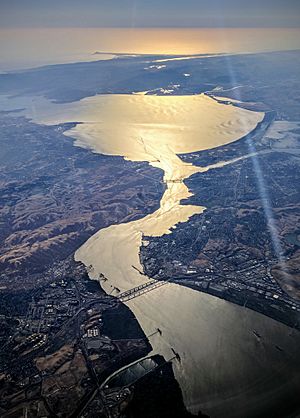 Andrei Sarna-Wojcicki, a geologist emeritus of the U. S. Geological Survey (USGS), has claimed that the Carquinez Strait was likely formed about 640,000 to 700,000 years ago, while much of modern California was emerging from an ice age. The present Sacramento Valley and San Joaquin Valley were covered by a huge lake (now extinct), which has been called Lake Corcoran. Initially, this lake drained into the ocean through a valley near present-day Monterey. However, ongoing seismic activity raised the coastal mountains sufficiently to plug this outlet. Concurrently, ice melting off the Sierras raised the water level in Lake Corcoran until the lake began to carve a new outlet to the ocean. At some point, the coastal barrier collapsed between today's cities of Crockett and Benicia, releasing lake water in a cataclysmic flood.

The strait forms part of the border between Solano (to the north) and Contra Costa (to the south) counties, and is approximately 15 mi (25 km) north of Oakland. The cities of Benicia and Vallejo lie on the north side of the strait, while Martinez, Port Costa, and Crockett sit on the southern coast. The Napa River joins the strait, via the short Mare Island Strait, near its entrance into San Pablo Bay. Its watershed covers 62,500 square miles (162,000 km2), approximately 40 percent of California's total surface.

The strait is named after the Karkin (los Carquines in Spanish), a linguistic division of the Ohlone Native Americans who resided on both sides of the strait.

The California Maritime Academy is at the western end of the strait on the northern waterfront. The C&H Sugar refinery is located on the southern shore in the small town of Crockett.

A rail bridge just east of the Benicia–Martinez Bridge is used by the Capitol Corridor, California Zephyr, and Coast Starlight trains. A rail ferry, with the ferries Contra Costa and Solano provided service across the strait near the location of the current rail bridge until the rail bridge was built in 1930.

The narrow gap in the Coast Range that forms the strait has led to the formation of the San Joaquin–Sacramento River Delta, an inverted river delta, upstream of it, a rare geological feature. The strait is too small to allow the passage of huge amounts of floodwaters created during years with heavy rainfall/snowmelt events. Because the Delta area is the first to fill and last to drain in a flood event, silt and soil have more time to drop out of suspension, creating the inverted river delta feature.

Seawater is more dense than fresh water because of its higher concentration of salts. Under stable conditions, this means that an invisible boundary forms where two such streams meet, as where the fresh water from Sacramento and San Joaquin Rivers meet the sea water contained in the San Francisco Bay.

By the early 20th century, farmers in the Sacramento-San Joaquin Delta, who depended on irrigating their fields with fresh water from the two rivers noticed an increase in salinity farther inland than before. It became obvious that fresh water was being pumped out of the Delta faster than it could be replenished by rain and snow during the wet season. Farmers, businessmen and politicians complained that allowing fresh water to flow to the ocean was wasteful. While many solutions were proposed, few appeared practical. A political consensus formed that damming the Carquinez Strait should solve the seawater intrusion problem.

In September 1923, the California Legislature appropriated $10,000 (equivalent to $159,000 today) for a saltwater dam survey. The Federal government added a $20,000 contribution ($318,000 today) through the U.S. Reclamation Service. Under Reclamation Service rules, another $10,000 needed to be raised from local supporters of the project. The necessary money was raised by March 1924, and the first of three site surveys was announced.

The first survey was at Army Point, near Benicia, which was the preferred site based on preliminary studies. The second choice was Dillon Point, near Southampton Bay, while the third survey was at San Pablo Point, near Richmond. The three surveys were completed by the end of 1924. However, it took four years to complete the decision-making process that officially named Army Point as the future dam site. Still more wrangling in the legislature was required before the "Salt Water Barrier" was officially adopted in May 1929, and made part of the state water conservation project.

On January 24, 1930, with the Great Depression taking hold, President Herbert Hoover cancelled the Carquinez Strait project, saying that it was too costly. All efforts to revive the project failed. Years later, the Central Valley Project attempted to mitigate the effects of seawater intrusion by constructing other dams much farther inland and canals to send fresh water to the San Joaquin Valley.

All content from Kiddle encyclopedia articles (including the article images and facts) can be freely used under Attribution-ShareAlike license, unless stated otherwise. Cite this article:
Carquinez Strait Facts for Kids. Kiddle Encyclopedia.