Port Costa is a census-designated place (CDP) in Contra Costa County, California, United States. The population was 190 at the 2010 census.

According to the United States Census Bureau, the CDP has a total area of 0.16 square miles (0.41 km2), all of it land. Port Costa is surrounded by rolling hills grazed by cattle and managed by East Bay Regional Park District. Carquinez Strait Regional Shoreline stretches from Crockett through Port Costa and to Martinez. Big Bull Valley Creek runs along McEwen Road into a historic reservoir just above the town, then it runs in an underground pipe culvert beneath the town to the Carquinez Strait.

Port Costa was founded in 1879 as a landing for the railroad ferry Solano, owned and operated by the Central Pacific Railroad. This put Port Costa on the main route of the transcontinental railroad. The Solano, later joined by the Contra Costa, carried entire trains across the Carquinez Strait from Benicia to Port Costa, from whence they continued on to the Oakland Pier. For a time, it was also the United States' busiest wheat-shipping port and had a reputation as a colorful, sometimes violent community.

After California's wheat output dropped in the early 20th Century and especially, after the Southern Pacific (which took over the operations of the Central Pacific) constructed a railroad bridge at Martinez in 1930 to replace the ferry crossing, Port Costa lost population and importance. Bill Rich was an influential property owner and raconteur. Since the late 1960s, it has mainly been a small shopping venue for antique hunters and a gathering place for bikers and motorcyclists. 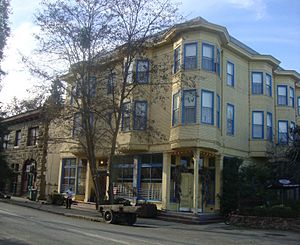 All content from Kiddle encyclopedia articles (including the article images and facts) can be freely used under Attribution-ShareAlike license, unless stated otherwise. Cite this article:
Port Costa, California Facts for Kids. Kiddle Encyclopedia.