The Carquinez Bridge is a pair of parallel bridges spanning the Carquinez Strait at the northeastern end of San Francisco Bay. They form the part of Interstate 80 between Crockett and Vallejo, California.

The name Carquinez Bridge originally referred to a single cantilever bridge built in 1927, which was part of the direct route between San Francisco and Sacramento. A second parallel cantilever bridge was completed in 1958 to deal with the increased traffic.

Later, seismic problems made the 1927 span unsafe in case of an earthquake, and led to the construction, and 2003 opening, of a replacement: a suspension bridge officially named the Alfred Zampa Memorial Bridge, in memory of iron worker Al Zampa, who played an integral role in the construction of numerous San Francisco Bay Area bridges. The Alfred Zampa Memorial Bridge carries westbound traffic from Vallejo to Crockett, and the 1958 cantilever span carries eastbound traffic.

The first regular crossing of the Carquinez Strait began in the mid-1800s as a ferry operated between the cities of Benicia and Martinez, six miles upstream from the bridge site. Auto service started on this route in 1913. A train ferry operated between Benicia and Porta Costa from 1879 until 1930 when a rail bridge opened. Ferry service at the site of the bridge started in 1913 by the Rodeo-Vallejo Ferry Company.

The original steel cantilever bridge was designed by Robinson & Steinman and dedicated on May 21, 1927. Prior to this, crossing the Carquinez Strait necessitated the use of ferries. The bridge cost $8 million to build. It was the first major crossing of the San Francisco Bay and a significant technological achievement in its time.

Upon its completion, the span became part of the Lincoln Highway. This historic transcontinental roadway's original alignment, like the Transcontinental Railroad that preceded it nearly sixty years earlier, chose to avoid crossing the Carquinez Strait entirely. The preferred option, given the engineering limitations of the day, was to skirt around the Delta by going south from Sacramento through Stockton, then proceeding west across the San Joaquin River and over the Altamont Pass, and finally reaching Oakland from the south; a route that would later become U.S. Route 50 and ultimately Interstates 5, 205, and 580. This circuitous route, several miles longer, and traversing a rather formidable mountain pass, was preferable to crossing the Carquinez Strait, a deep channel with strong currents and frequent high winds. For decades, building a bridge across the Carquinez Strait was considered prohibitively expensive and technologically risky. Once the bridge was built however, driving from Sacramento to the East Bay became much more direct. The Carquinez Bridge provided a welcome alternative route from the Central Valley to the Bay Area, one that no longer required loading one's vehicle onto and off of a ferry. With the bridge completed, the Lincoln Highway was realigned to cross the Sacramento River, then proceed southwest through Davis and Vallejo, across the Carquinez Bridge, and along the shores of the San Pablo and San Francisco bays to Richmond and Oakland; becoming U.S. Route 40, and ultimately Interstate 80.

After the Loma Prieta earthquake engineers determined that the aging 1927 span was seismically unstable, and that a retrofit was impossible. The decision was made to replace it with a new suspension bridge. The 1927 span was temporarily used to hold eastbound traffic while the 1958 eastbound span underwent a seismic retrofit, deck and superstructure rehabilitation, and painting to extend its serviceable life. The old 1927 cantilever bridge was dismantled three years after the opening of its replacement; with completion on September 4, 2007. A 3,000-pound bronze bell atop one of the bridge piers was removed and placed into storage. The bell will eventually be displayed in a new museum to be built at the Oakland end of the San Francisco–Oakland Bay Bridge.

At a cost of $38 million a parallel bridge was built just east of the 1927 bridge. The new bridge carried all traffic for a few months after it opened in November 1958, then after new ramps were built, the three-lane 1927 span, originally two-way, served westbound traffic while the four-lane 1958 span handled eastbound traffic. 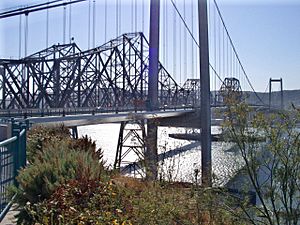 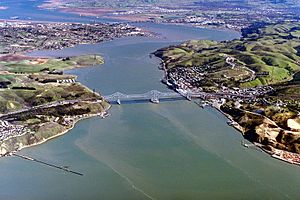 Aerial view of Carquinez Strait and bridges, prior to construction of the new suspension bridge

At a cost of $240 million a new suspension bridge was built, to the west of the two earlier bridges, by the joint venture consisting of Flatiron Structures of Longmont, Co., FCI Constructors of Benicia, Ca., and the Cleveland Bridge & Engineering Company of Darlington, England.

This new bridge was named the Alfred Zampa Memorial Bridge, after an ironworker who worked on a number of the San Francisco Bay Area bridges, including the Golden Gate Bridge, and the original 1927 Carquinez span. The bridge was dedicated on November 8, 2003 and opened for traffic on November 11, 2003. Originally, the plan was to dedicate the bridge on November 15, but complications involving then just-recalled Governor Gray Davis and the transfer of power to Arnold Schwarzenegger resulted in the date being moved. The coins minted to commemorate the event have the original date on them.

The new suspension bridge, consists of the south anchorage, a transition pier, the South and North towers, and the north anchorage. It has spans of 147 m, 728 m, and 181 m. for a total span of 0.66 miles (1,060 m). It features a pedestrian and bicycle path, part of a bike trail which it is hoped will eventually circle the entire Bay Area. The towers are each founded on two footings, which are each supported by six vertical, 3-metre-diameter (9.8 ft) steel shells infilled with reinforced concrete, followed by 2.7-metre-diameter (8.9 ft) drilled shafts in rock, i.e., cast-in-drilled hole, or CIDH, piles. The total length of the CIDH pile at the South Tower is approximately 89 m, with about 43 m of drilled shaft in rock. The total length of the CIDH pile at the North Tower ranges from 49 to 64 m, with about 16 to 26 m of drilled shaft in rock. The design parameters used for the South Tower piles were later confirmed by a pile load test. Additional field investigations during construction revealed significant variations in rock conditions at the North Tower, resulting in the redesign of the length of the piles. Major construction challenges encountered during construction of the South Tower piles, and the revised construction procedure, i.e., under-reaming, used by the constructor to mitigate caving.

Materials for the New Bridge came from all over the world:

Tolls are collected only from automotive traffic headed eastbound, towards Vallejo at the toll plaza on the north side of the bridge. Although the 2003 Alfred Zampa Memorial Bridge is the newer span, no toll is charged in that direction, continuing the practice of when the now-demolished 1927 span. Since July 2010, the toll rate for passenger cars has been $5. During peak traffic hours, carpool vehicles carrying two or more people or motorcycles pay a discounted toll of $2.50. For vehicles with more than two axles, the toll rate is $5 per axle. Drivers may either pay by cash or use the FasTrak electronic toll collection device.

The basic toll (for automobiles) on the seven state-owned bridges, including the Carquinez Bridge, was raised to $1 by Regional Measure 1, approved by Bay Area voters in 1988. A $1 seismic retrofit surcharge was added in 1998 by the state legislature, originally for eight years, but since then extended to December 2037 (AB1171, October 2001). On March 2, 2004, voters approved Regional Measure 2, raising the toll by another dollar to a total of $3. An additional dollar was added to the toll starting January 1, 2007, to cover cost overruns concerning the replacement of the eastern span.

The Metropolitan Transportation Commission, a regional transportation agency, in its capacity as the Bay Area Toll Authority, administers RM1 and RM2 funds, a significant portion of which are allocated to public transit capital improvements and operating subsidies in the transportation corridors served by the bridges. Caltrans administers the "second dollar" seismic surcharge, and receives some of the MTC-administered funds to perform other maintenance work on the bridges. The Bay Area Toll Authority is made up of appointed officials put in place by various city and county governments, and is not subject to direct voter oversight.

Due to further funding shortages for seismic retrofit projects, the Bay Area Toll Authority again raised tolls on all seven of the state-owned bridges in July 2010. The toll rate for autos on the Carquinez Bridge was thus increased to $5.

In June 2018, Bay Area voters approved Regional Measure 3 to further raise the tolls on all seven of the state-owned bridges to fund $4.5 billion worth of transportation improvements in the area. Under the passed measure, the toll rate for autos on the Carquinez Bridge will be increased to $6 on January 1, 2019; to $7 on January 1, 2022; and then to $8 on January 1, 2025.

In September 2019, the MTC approved a $4 million plan to eliminate toll takers and convert all seven of the state-owned bridges to all-electronic tolling, citing that 80 percent of drivers are now using Fastrak and the change would improve traffic flow. On March 20, 2020, at midnight, due to the COVID-19 pandemic, all-electronic tolling was temporarily placed in effect for all seven state-owned toll bridges, and as of December 10, 2020, all of the state-owned toll bridges are now permanently cashless.

Carquinez Bridge in the media

All content from Kiddle encyclopedia articles (including the article images and facts) can be freely used under Attribution-ShareAlike license, unless stated otherwise. Cite this article:
Carquinez Bridge Facts for Kids. Kiddle Encyclopedia.