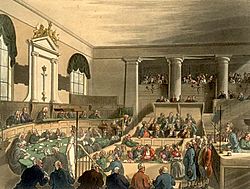 Criminal law is the part of law that is about social norms. People who violate these norms are punished for their violation. It is different from civil law. Criminal law wants to protect certain values, such as life and limb, or property.

All content from Kiddle encyclopedia articles (including the article images and facts) can be freely used under Attribution-ShareAlike license, unless stated otherwise. Cite this article:
Criminal law Facts for Kids. Kiddle Encyclopedia.