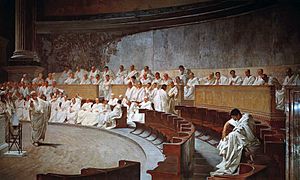 Cicero, author of the classic book The Laws, attacks Catiline for attempting a coup in the Roman Senate.

Roman law is the name used for a system of laws used by the Roman Empire. It started with the twelve tablets, 749 BC, and ended with the law code ordered by Justinian I. As such, Roman law is the foundation of most legal systems in Europe, and its former colonies, as well as Japan.

All content from Kiddle encyclopedia articles (including the article images and facts) can be freely used under Attribution-ShareAlike license, unless stated otherwise. Cite this article:
Roman law Facts for Kids. Kiddle Encyclopedia.