Kids Encyclopedia Facts
This page is about the legislative procedure. For the military term, see Filibuster (military). 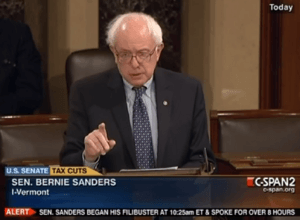 Filibuster, also known as talking out a bill, is a tactic of parliamentary procedure. It is a way for one person to delay or entirely prevent debate or votes on a specific proposal.

The term "filibuster" comes from the French "flibustier" word meaning "pillaging pirate." In terms of parliamentary procedure, the word was not used until the 19th century However, the use of long speeches as a delaying tactic is part of the history of the Roman Senate. For example, Cato the Younger is known for using filibuster tactics to block Julius Caesar's rise to power.

All content from Kiddle encyclopedia articles (including the article images and facts) can be freely used under Attribution-ShareAlike license, unless stated otherwise. Cite this article:
Filibuster Facts for Kids. Kiddle Encyclopedia.