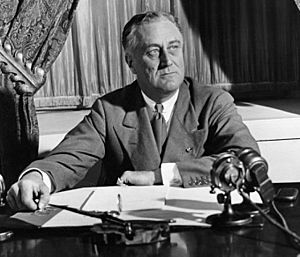 Franklin D. Roosevelt was the only US president to be elected four times. In 1951 the 22nd Amendment limited the US presidency to two terms

A term limit is a law that limits the number of terms an officeholder may serve in a particular elected office. When term limits are found in presidential systems, they act as a method to reduce the potential for monopoly. This is when a leader effectively becomes a "president for life". Term limits are intended to protect a democracy from becoming a de facto dictatorship. Sometimes, there is an absolute limit on the number of terms an officeholder can serve. In other cases, the restrictions are merely on the number of consecutive (one directly following the other) terms.

Ancient Greece and Ancient Rome, two early civilizations which had elected offices, both imposed limits on some positions. In the ancient Athenian democracy, only offices selected by sortition were subject to terms limits. They included one term of one year for each office, except members of the Council of Five Hundred, where the council was changed every year.

In the Roman Republic, a law was passed imposing a limit of a single term on the office of censor. The annual magistrates - tribune of the plebs, aedile, quaestor, praetor, and consul—were forbidden reelection until a number of years had passed. Also there was a term limit of 6 months for a dictator.

All content from Kiddle encyclopedia articles (including the article images and facts) can be freely used under Attribution-ShareAlike license, unless stated otherwise. Cite this article:
Term limit Facts for Kids. Kiddle Encyclopedia.