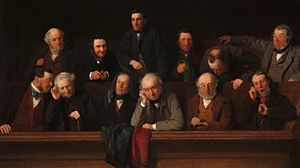 English law, also called common law, is the legal system of England and Wales. It is generally divided into criminal law and civil law. It spread to many parts of the former British Empire including Australia, Canada, the United States and New Zealand, and many other countries.

English law is unique in that it is based on applying legal precedent to present and future decisions made by judges. A judge must follow past legal decisions made by higher courts but not necessarily those made by lower courts. English law is not based on a constitution and there is no codification of laws. However, there are unofficial publications that provide organized lists of current laws. Parliament has the power to create laws which are automatically considered valid and may not be reviewed by the courts. Only Parliament has the power to change a law. 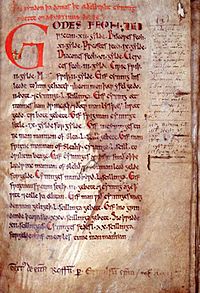 Opening page of the 7th century Law of Æthelberht

Written in about 602, the Law of Æthelberht (Athelbert of Kent) is the oldest example of Anglo-Saxon law, or of law in any Germanic language. Anglo-Saxon law was based on Ancient Germanic law which was a system of laws based on kinship. The kinship group was responsible for the acts of their members as well as for their protection. Wrongs against another were paid by Weregild, a value placed on every person and piece of property. By the 10th century these had changed into a system of hundreds. No longer based on kinship, they organized themselves to protect others in the hundred and to enforce the laws. A hundredsmann was in charge of a hundred and was responsible to see that all disputes were settled.

In 1066, the Norman conquest of England brought with it many changes in the law. While much of Anglo-Saxon law was kept, new laws were added over time by the Normans. Before the Norman invasion, most laws in England were local laws and enforced by local courts. Royal courts were introduced They did not take over local laws right away, but did so over a period of time. The royal courts took the best of the local laws and used them throughout England. This established English common law, or a system of laws common to the entire country. By this time a second court system developed known as equity and administered by the Court of Chancery. Equity addressed situations not covered by common law. Examples of equity decisions include imposing a lien, correcting a property line or ordering someone to do something to prevent damage.

The 18th century legal scholar, William Blackstone, wrote a four-volume Commentaries on the Laws of England which for the first time provided a complete overview of English law. Originally published 1765–1769, it has since been republished many times. Used well into the 19th century, his Commentaries were the main instruction tool in learning the law in both England and America. Abraham Lincoln read Blackstone's Commentaries as part of teaching himself the law.

The jury system probably came to England just after the Norman conquest. At first, jurors acted as witnesses in court. But over time, certainly by the reign of Henry II of England, they became the trier of fact in a court case. Juries began to deliberate the evidence provided by the parties in a dispute. Over time, jurors were told less and less about a case before a trial and learned what they needed to make a decision in court.

Unlike Scotland and Northern Ireland, Wales is not a separate jurisdiction in the United Kingdom. The old laws of Wales within the Kingdom of England were abolished by King Henry VIII's Laws in Wales Acts. This brought Wales into legal conformity with England. Between 1746 and 1967, any reference to England in legislation included Wales. This ceased with the enactment of the Welsh Language Act 1967. The jurisdiction is now commonly referred to as "England and Wales". Although Wales has a degree of political autonomy, it did not have the ability to pass primary legislation until the Government of Wales Act 2006 came into force after the 2007 Welsh general election. Even so, the Welsh legal system remains English common law. This is different from the situation of Northern Ireland. It did not stop being a distinct jurisdiction when its legislature was suspended. A major difference is also the use of the Welsh language, as laws concerning it apply in Wales and not in the rest of the United Kingdom. The Welsh Language Act 1993 is an Act of the Parliament of the United Kingdom. It put the Welsh language on an equal footing with the English language in Wales with regard to the public sector. Welsh may also be spoken in Welsh courts.

In England, there is a hierarchy of sources, as follows:

All content from Kiddle encyclopedia articles (including the article images and facts) can be freely used under Attribution-ShareAlike license, unless stated otherwise. Cite this article:
English law Facts for Kids. Kiddle Encyclopedia.