Code of Hammurabi facts for kids 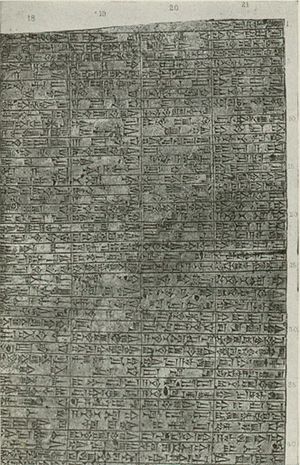 An inscription of the Code of Hammurabi

The Code of Hammurabi is a well-preserved Babylonian code of law of ancient Mesopotamia, dating back to about 1754 BC (Middle Chronology). It is one of the oldest deciphered writings of significant length in the world. The sixth Babylonian king, Hammurabi, enacted the code, and partial copies exist on a seven and a half foot stone stele and consists of 282 laws, with scaled punishments, adjusting "an eye for an eye, a tooth for a tooth" (lex talionis) as graded depending on social status, of slave versus free man or woman.

It was written on a stele (a large stone monument), and put in a public place where everyone could see it. The stele was later captured by the Elamites and taken to their capital, Susa. It was found there again in 1901, and is now in the Louvre Museum in Paris.

The code of Hammurabi had 282 laws written by scribes on 12 tablets. Unlike earlier laws, it was written in Akkadian, the daily language of Babylonia. 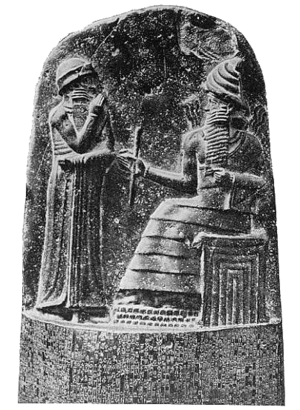 Figures at top of stele above Hammurabi's code of laws

The Code of Hammurabi is the longest surviving text from the Old Babylonian period. The code is an early example of a law regulating a government: a kind of primitive constitution. The code is also one of the earliest examples of the "presumption of innocence" (innocent until proven otherwise). It suggests that both the accused and accuser have the opportunity to provide evidence.

The Code of Hammurabi was one of several sets of laws in the ancient Near East. The code of laws was arranged in groups, so that everyone who read the laws would know what was required of them. There were earlier laws, and later laws such as the Law of Moses in the Hebrew Bible. These codes come from cultures in a relatively small geographical area, and they have passages which resemble each other.

Nearly half the Code deals with contracts. It sets the wages to be paid to an ox driver or a surgeon. Other passages set the liability of a builder for a house that collapses, for example, or property that is damaged while left in the care of another.

A third of the code concerns household and family matters such as inheritance, divorce and paternity.

An eye for an eye

For each crime, a specific punishment is listed. The punishments tended to be harsh by modern standards. They included death, cutting off a body part, and the use of the "Eye for eye, tooth for tooth"-philosophy. The penalties of his laws may seem cruel to modern readers, but the fact that he put into writing the laws of his kingdom is considered an important step forward in the development of civilization.

The Code of Hammurabi was one of many sets of laws in the Ancient Near East.

All content from Kiddle encyclopedia articles (including the article images and facts) can be freely used under Attribution-ShareAlike license, unless stated otherwise. Cite this article:
Code of Hammurabi Facts for Kids. Kiddle Encyclopedia.