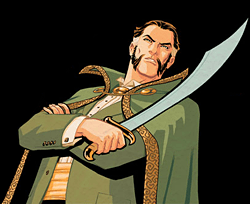 Ra's al Ghul is a fictional character in the Batman franchise. He is a supervillain, and he was Bruce Wayne's trainer. He is the leader of the League of Shadows, which is an organization based on correcting the corruption in the world by ways of fear and hostility. Bruce destroyed their temple after he is made aware of their true intention of destroying Gotham City.

Ghul is one of the smartest and most physically skilled villains in the Batman universe. He also trained Bane. Ghul is the father of one of Batman's love interests: Talia al Ghul. He was played by Liam Neeson and by Ken Watanabe (decoy) in Batman Begins. Neeson later had a small role as Ra's in The Dark Knight Rises in which his daughter, Talia appears in. David Warner is his voice actor in Batman: The Animated Series.

All content from Kiddle encyclopedia articles (including the article images and facts) can be freely used under Attribution-ShareAlike license, unless stated otherwise. Cite this article:
Ra's al Ghul Facts for Kids. Kiddle Encyclopedia.