Jason Isaacs (born 6 June 1963) is an English actor and voice actor. He is known for playing Lucius Malfoy in the Harry Potter film series, Colonel William Tavington in The Patriot, and criminal Michael Caffee in the Showtime series Brotherhood.

It was announced in March 2017 that Isaacs would play the role of Captain Gabriel Lorca in the new CBS All Access' series, Star Trek: Discovery. The series premiered on 24 September 2017. Isaacs made his first appearance as Lorca on 1 October 2017 in the third episode, "Context Is for Kings". 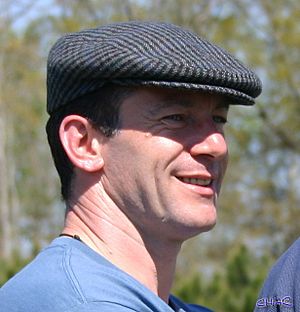 Isaacs at a Masters Celebrity Pro-Am Golf Tournament in 2005

Isaacs began living with his partner, BBC documentary filmmaker Emma Hewitt, in 1988, whom he started dating at the Central School. The couple have since married and had two daughters.

Despite Isaacs' screen celebrity as Lucius Malfoy, he describes himself as maintaining a "calm, sedate and suburban" life and has spoken of travelling to film premieres unrecognised on the London Underground. Isaacs was among the many celebrities who participated in the Masters Celebrity Pro-Am Golf Tournament in 2005.

All content from Kiddle encyclopedia articles (including the article images and facts) can be freely used under Attribution-ShareAlike license, unless stated otherwise. Cite this article:
Jason Isaacs Facts for Kids. Kiddle Encyclopedia.