Dick Dastardly is a fictional character and villainous anti-hero who appeared in various animated series by Hanna-Barbera Productions from 1968 onward. Dastardly's most famous appearances are as a main character in the series Wacky Races (his initial appearance) and its spin-off, Dastardly and Muttley in Their Flying Machines where he appeared as a protagonist. He is partly based on the English actor Terry-Thomas.

The character was originally voiced by Paul Winchell, using a characterization that Winchell would also employ several years later to voice the Smurfs' nemesis Gargamel. Winchell's facial structures were caricatured in the related character design as well. In a live action version played by British actor Porter Flynn a prosthetic nose and chin were employed to replicate Dastardly's exaggerated features from the original cartoon.

In subsequent depictions of the character, Dick Dastardly was voiced by Rob Paulsen and by Jim Cummings (the latter of whom was notable for voicing other characters previously voiced by Winchell, including Tigger and Zummi Gummi).

Dastardly's catchphrases in the cartoons were "Muttley, do something!", "Drat, and double drat!" and occasionally "Triple drat!" or "Curses, foiled again!", otherwise.

In Wacky Races, Dastardly was one of the drivers who competed in each episode for first place, in a long and hazard-filled cross-country road rally. As his name implies, Dastardly aimed to win solely through cheating and trickery. His race car, numbered double-zero and named "The Mean Machine", featured all sorts of devious traps for him to use against his opponents. As Wacky Races is inspired by the film The Great Race, so was Dastardly derived from the film's chief villain, Professor Fate, played by Jack Lemmon. Dastardly in this series wore old-fashioned racer's gear — a long blue duster overcoat often worn by early motorists, along with long red gloves, a large striped hat with driving goggles attached, and sporting a handlebar mustache.

Dastardly was aided in his schemes by his sidekick, a scruffy anthropomorphic dog named Muttley who had a distinctive wheezy laugh, heard most often when Dastardly's schemes failed. Despite Dastardly and Muttley's attempts, the "double-dealing do-badders", as the opening narration of Wacky Races describes them, failed to win a single race. Dastardly came close to winning on several occasions, but has always failed, either through his own actions or bad luck, such as posing for his picture as it was a photo finish, stopping to sign an autograph for Muttley, and having Muttley sabotage his own vehicle (Dick told the hound to "stop the winding car"). On one occasion Dastardly did cross the finish line in first place, but was revealed to have extended the nose of his car at the last moment, and was disqualified in favour of Penelope Pitstop; this despite the fact that other characters had pulled similar stunts in the past without punishment (and indeed the original footage showed that Dastardly had not extended the nose of his car). In one episode in which he accidentally crossed the finish line first he was still disqualified; due to a series of crazy car mix-ups, Dastardly and Muttley were in the wrong car!

It seemed likely that if Dastardly had not bothered to cheat, he might have won many of the races fairly: The Mean Machine was the fastest car on the grid, and Dastardly's driving ability was often shown to be superior to the other racers. (Alas, Dick seemed bound to a code similar to that of wrestler Gorgeous George: "Win if you can, lose if you must, but always cheat!" In fact, in one episode he came close to crossing the finish line first without cheating, but chose not to win and let the other racers finish before him, as he did not want to win fairly).

Dastardly and Muttley in Their Flying Machines

Main page: Dastardly and Muttley in Their Flying Machines

Dick Dastardly continued his villainous career in the Wacky Races spin-off Dastardly and Muttley in Their Flying Machines. The series was inspired by the 1965 film Those Magnificent Men in Their Flying Machines and Dastardly's appearance is based on the film's villain, Sir Percival Ware-Armitage, played by Terry-Thomas. Dastardly and Muttley flew with two other pilots: Zilly, a coward who would hide in his own clothing when ordered to deploy, and Klunk, the mechanic/inventor, who speaks a language largely composed of strange sounds that only Zilly can understand.

Together, they comprised the "Vulture Squadron", presumably working for Germany and Central Powers in World War I. The squadron constantly attempted to stop a messenger pigeon, "Yankee Doodle Pigeon", from delivering messages to an opposing army (seemingly American and/or the Triple Entente), often with the song "Stop the Pigeon" playing. A typical scene shows the Vulture Squadron all converging from different directions on Yankee Doodle Pigeon, only to end up crashing into one another—while the bird remained unharmed. As in Wacky Races, Dastardly continued to fail miserably at his mission, only coming near to success on a single occasion. Muttley, despite showing enough competence to win various medals (which Dastardly was constantly threatening to revoke), seemed to delight in Dick's failures, displaying his trademark snickering laugh.

In later years, Dastardly and Muttley were the nemeses for Yogi Bear and his friends in the 1980s series Yogi's Treasure Hunt. This time, Dick repeatedly failed at discovering hidden treasure before Yogi and his team. It was in this series' episode Yogi's Heroes that Dick's full name was revealed; as the leader of an island named Dicaragua, he introduced himself as Richard Milhous Dastardly (a play on former U.S. President Richard Milhous Nixon). One episode shows that Dastardly and Muttley are the greediest creatures in the world.

Dick Dastardly and Muttley were in the "Fender Bender 500" shorts on the early 1990s short-lived series Wake, Rattle, and Roll. In those segments, the duo once again appeared in a suped-up version of the Mean Machine as a monster truck called the Dirty Truckster (a pun on the phrase "dirty trickster"), but raced against such Hanna-Barbera stalwarts as Yogi Bear and Quick Draw McGraw. In this series, they were actually able to pull off a win when racing to Russia's 'Red Square' where it was announced that the prize was itself the Red Square. Unfortunately, their prize was simply a red square of paper, and not the deed to the Russian capital as the title of 'red square' would imply. In another Fender Bender race (The "Hit 'n' Mississippi 500"), he played on Yogi Bear's famous catchphrase of being "smarter than the average bear" by claiming to be "smarter than the average cheat".

Dick Dastardly (alongside Muttley) appeared as a child (known as Dickie) in the short-lived series Yo Yogi!, voiced by Rob Paulsen. In the series he rides a bicycle that resembles the Mean Machine and his clothes resemble his ones from Dastardly and Muttley in Their Flying Machines. Dick Dastardly would often come up with various plots which would often backfire on him.

Dick Dastardly is the main antagonist in the animated Scooby-Doo film Scoob!, voiced by Jason Isaacs. This version of Dick lacks the hat and goggles he usually wears, and his overcoat is now a dark purple longcoat. According to his police report, this version of Dastardly is 6' 5", 295lbs. He is also depicted as more of a supervillain than a racer, having robotic minions called Rottens and being an enemy of the Blue Falcon. He operates a giant airship that is loosely based on his racing vehicle, the Mean Machine. During a scheme to steal the treasure horde left by Alexander the Great in the Greek underworld by use of a dimensional portal, Dastardly lost Muttley in the underworld when the portal was found to be one way only. He then seeks out the three skulls of Cerberus and Scooby-Doo because as the last descendant of Peritas, Alexander's dog, he is the key to opening the gates to the Underworld and reuniting with Muttley; though at the cost of unleashing Cerberus onto the world. After achieving this, Dastardly and Muttley try to escape with treasure but are captured by the reformed Rottens, and taken into custody by Blue Falcon, Dynomutt, and Dee Dee Skyes. At one point upon his capture, Dick tried to do a double-mask move by making them think he was a disguise of Simon Cowell. During the credits, Muttley breaks Dastardly out of prison.

In the 2017 reboot of Wacky Races it is revealed that the Dick Dastardly who flew in World War I (voiced by Tom Kenny) was the father of the Dick Dastardly (presumably Dick Jr.) of the original Wacky Races. In the new version, Dick Jr.'s son/descendant, Dick Dastardly III, technically wins in the episode "Sister Twister" - winning the "Great Sportsman of the Year" trophy after he made a bet with Peter Perfect that involved him being nice and not cheating for once. He won due to Pandora disguising herself as Penelope who proceeded to act unsportmans-like and so the judges gave the win to Dastardly - however - to Dastardly's horror, he won by due to the sudden shift in his personality, such saying nice things to other racers and not cheating. The event also had involved race, which Dastardly of course lost, though it had no effect on who won the trophy. 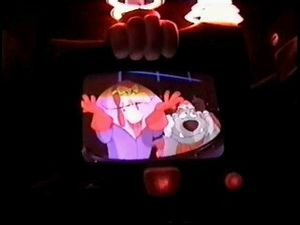 Dick Dastardly and Muttley appear as antagonists in the Universal Studios Florida attraction, The Funtastic World of Hanna-Barbera.

All content from Kiddle encyclopedia articles (including the article images and facts) can be freely used under Attribution-ShareAlike license, unless stated otherwise. Cite this article:
Dick Dastardly Facts for Kids. Kiddle Encyclopedia.