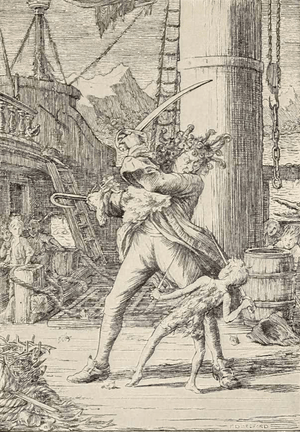 Captain James Hook is a fictional character and the antagonist of J. M. Barrie's play Peter Pan, or the Boy Who Wouldn't Grow Up and its various adaptations. The character is a villainous pirate captain of the Jolly Roger galleon, and lord of the pirate village/harbour in Neverland, where he is widely feared. Most importantly, he is the nemesis of Peter Pan. It is said that Hook was Blackbeard's boatswain, and that he was the only man Long John Silver ever feared.

Hook wears an iron hook in place of his hand, which was cut off by Peter Pan and eaten by a crocodile. The crocodile liked the taste so much, he follows Hook around constantly, hoping for more. Luckily for Hook, the crocodile also swallowed a clock, so Hook can tell from the ticking when he is near. Hook hates Peter obsessively and lives for the day he can make Peter and all his Lost Boys walk the plank.

Smee is Captain Hook's boatswain and right-hand man, so to speak. Contrary to popular belief, however, Smee was not First Mate; Starkey was.

All content from Kiddle encyclopedia articles (including the article images and facts) can be freely used under Attribution-ShareAlike license, unless stated otherwise. Cite this article:
Captain Hook Facts for Kids. Kiddle Encyclopedia.