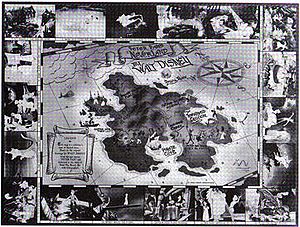 Map of Neverland created by Walt Disney Productions as a promotion for its 1953 film Peter Pan. Users of Colgate-Palmolive's "Peter Pan Beauty Bar with Chlorophyll" could obtain the map by mailing in three soap wrappers and fifteen cents.

Neverland is a fictional island that is the setting for the novel Peter Pan by J.M. Barrie. Peter Pan, his gang of "Lost Boys" and Tinkerbell, the fairy, live on Neverland. A gang of pirates led by Captain Hook and a band of Native Americans ("redskins" in the story) also live on the island.

Neverland is a land of fantasy where no one gets older and Peter Pan remains a child forever. To reach Neverland, Peter Pan states one must fly "second to the right, and straight on till morning".

All content from Kiddle encyclopedia articles (including the article images and facts) can be freely used under Attribution-ShareAlike license, unless stated otherwise. Cite this article:
Neverland Facts for Kids. Kiddle Encyclopedia.