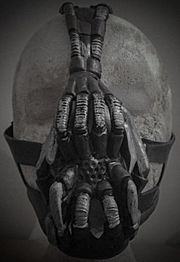 Bane is a fictional Batman character appearing in American comic books published by DC Comics. Created by Chuck Dixon, Doug Moench, and Graham Nolan, he made his debut in Batman: Vengeance of Bane #1 (January 1993). Bane is a supervillain who appears in the Batman comics. He is physically strong and wears a Mexican wrestlers mask. He has a tube that connects from his body to a chemical tank that is strapped to his suit that keeps him strong. He is one of Batman's most physical and smarter villains credited to be the only character in comic books who has broken the bat, both physically and mentally.

All content from Kiddle encyclopedia articles (including the article images and facts) can be freely used under Attribution-ShareAlike license, unless stated otherwise. Cite this article:
Bane (comics) Facts for Kids. Kiddle Encyclopedia.