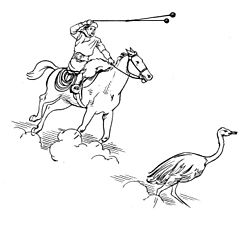 A hunter mounted on a horse using bolas.

Bolas (from Spanish bola, "ball", also known as boleadoras) are a throwing weapon made of weights on the ends of interconnected cords, designed to capture animals by entangling their legs. They are used by the gauchos in South America today, but have been found in excavations of pre-Hispanic settlements, especially in Patagonia, where indigenous peoples used them to catch guanaco and ñandu. 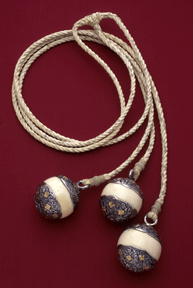 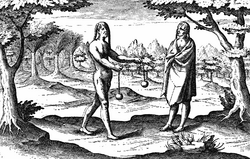 Gauchos use boleadoras to capture running cattle or game. The thrower gives the balls momentum by swinging them and then releases the boledoras. The weapon is usually used to entangle the animal's legs, but when thrown with enough force might even break the bone.

There is no uniform design; most bolas have two or three balls, but there are versions of up to 8 or 9 balls. Some bolas have balls of equal weight,othes vary the knot and cord. Gauchos use bolas made of leather cords with wooden balls or small leather sacks full of stones in the ends of the cords.

Bolas can be named depending on the amount of weights used:

All content from Kiddle encyclopedia articles (including the article images and facts) can be freely used under Attribution-ShareAlike license, unless stated otherwise. Cite this article:
Bolas Facts for Kids. Kiddle Encyclopedia.