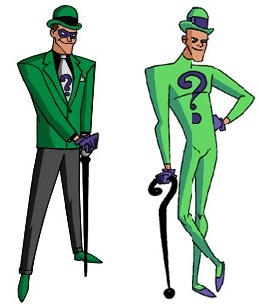 The Riddler as he appeared in Batman: The Animated Series (left) and The New Batman Adventures (right)

The Riddler (Dr. Edward Nigma) is a fictional Batman character who leaves Batman all of his best riddles to help Batman know were he will strike next or what he will do. He wears a green suit with a big purple question mark on it. He sometimes wear a hat also with a question mark.

He was voiced by John Glover in Batman: The Animated Series. He was also voiced by Robert Englund in The Batman. He was played by Jim Carrey in Batman Forever.

All content from Kiddle encyclopedia articles (including the article images and facts) can be freely used under Attribution-ShareAlike license, unless stated otherwise. Cite this article:
Riddler (comics) Facts for Kids. Kiddle Encyclopedia.