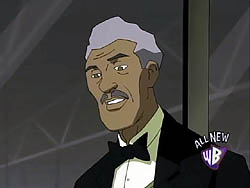 Lucius Fox in The Batman.

Lucius Fox is a fictional Batman character who helps Batman with equipment and is the manager of Wayne Enterprises. He gives Batman all of the equipment or his financing operations that he needs. He is one of the few people to known Batman's secret identity.

He is played by Morgan Freeman in Batman Begins, The Dark Knight, and in The Dark Knight Rises. Brock Peters was his voice actor in Batman: The Animated Series. Kevin Michael Richardson also makes his voice in some animated movies.

All content from Kiddle encyclopedia articles (including the article images and facts) can be freely used under Attribution-ShareAlike license, unless stated otherwise. Cite this article:
Lucius Fox Facts for Kids. Kiddle Encyclopedia.