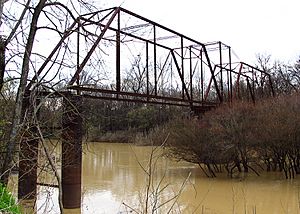 The United States Army Corps of Engineers maintains a navigation channel, thirty miles in length. Built in 1976, the channel is used by barges and pleasure craft.

According to the USGS, variant names include Hushpuckaman Creek. The Hushpuckena River drains the northwestern part of the Sunflower River Basin, Quiver River drains the northeastern portion, and Bogue Phalia drains the west central portion of the watershed, all of which lies in the alluvium soil of the Yazoo Delta. At Sunflower, Mississippi, the river flow measures approximately 1,099 cubic feet per second.

Like the Yazoo, this river is silt laden. The river collects mud from runoff in the bayous and small streams that feed it. The river has a distinct "Clear-Mud Line" where it meets the Yazoo, showing that the Big Sunflower is muddier than the Yazoo at their confluence.

Early investigators of Native American culture identified many mound sites along the river. With what is now known of the cultures in the Southeast, scholars believe these earthwork mounds to have been built by cultures that existed before the emergence of the Choctaw and Chickasaw peoples. Clarence B. Moore conducted notable studies of the earthworks on the river near Holly Bluff, about a half a mile from the entrance to Lake George.

Land use along the river and in the watershed is predominately agricultural, with many large-scale, industrial-style farms. From the antebellum period into the 20th century, cotton was the major commodity crop.

All content from Kiddle encyclopedia articles (including the article images and facts) can be freely used under Attribution-ShareAlike license, unless stated otherwise. Cite this article:
Sunflower River Facts for Kids. Kiddle Encyclopedia.