Lang has won both Juno Awards and Grammy Awards for her musical performances; hits include "Constant Craving" and "Miss Chatelaine". She has contributed songs to movie soundtracks and has collaborated with musicians such as Roy Orbison, Tony Bennett, Elton John, Anne Murray, Ann Wilson, and Jane Siberry.

Lang is also known for being an animal rights, gay rights, and Tibetan human rights activist. She is a tantric practitioner of the old school of Tibetan Buddhism. She performed Leonard Cohen's "Hallelujah" live at the opening ceremony of the 2010 Winter Olympics in Vancouver, British Columbia. Previously, she had performed at the closing ceremony of the 1988 Winter Olympics in Calgary, Alberta. Lang possesses the vocal range of a mezzo-soprano. 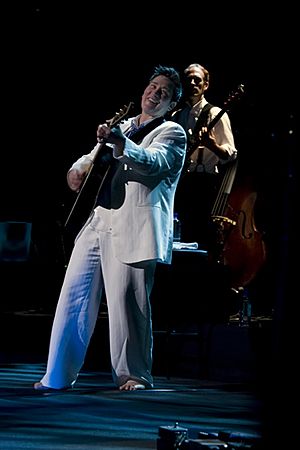 In November 2005, Lang received the National Arts Centre Award, a companion award of the Governor General's Performing Arts Awards. On June 3, 2008, it was announced that she would receive a star on Canada's Walk of Fame. In 2018 Lang was appointed to the Alberta Order of Excellence.

Lang, who came out as a lesbian in a June 1992 article of the LGBT news magazine The Advocate, has championed gay rights causes, she also is a member of Canadian charity Artists Against Racism. 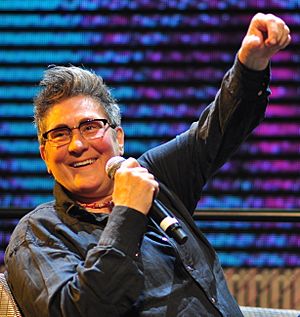 Lang was born in Edmonton, Alberta, the daughter of Audrey Bebee and Adam Frederick Lang. She is of English, Irish, Scottish, German, Russian-Jewish, Icelandic, and Sioux ancestry. When Lang was nine months old, her family moved to Consort, Alberta, where she grew up with two sisters and one brother on the Canadian prairie.

After secondary school, Lang attended Red Deer College, where she became fascinated with the life and music of Patsy Cline and decided to pursue a career as a professional singer. She moved to Edmonton after her graduation in 1982 and formed a Patsy Cline tribute band called the Reclines in 1983. She and the Reclines recorded a debut album, Friday Dance Promenade, at Sundown Recorders. Label owner Larry Wanagas became her personal manager. Singing at country and western venues in Canada, Lang began to establish an appearance and style referred to as "cowboy punk".

Lang made several recordings that received very positive reviews and earned a 1985 Juno Award for Most Promising Female Vocalist. She has won a total of eight Juno Awards. 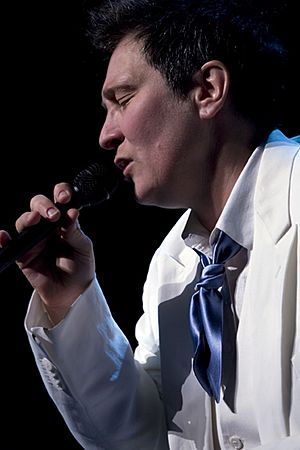 All content from Kiddle encyclopedia articles (including the article images and facts) can be freely used under Attribution-ShareAlike license, unless stated otherwise. Cite this article:
K.d. lang Facts for Kids. Kiddle Encyclopedia.