The Fairmont San Francisco is an AAA Four-Diamond luxury hotel at 950 Mason Street, atop Nob Hill in San Francisco, California. The hotel was named after mining magnate and U.S. Senator James Graham Fair (1831–94), by his daughters, Theresa Fair Oelrichs and Virginia Fair Vanderbilt, who built the hotel in his honor. The hotel was the vanguard of the Fairmont Hotels and Resorts chain. The group is now owned by Fairmont Raffles Hotels International, but all the original Fairmont hotels still keep their names.

It has been featured in many films, including The Rock. Exterior and interior shots of the hotel were used as stand-ins for the fictional St. Gregory Hotel in the television series Hotel. 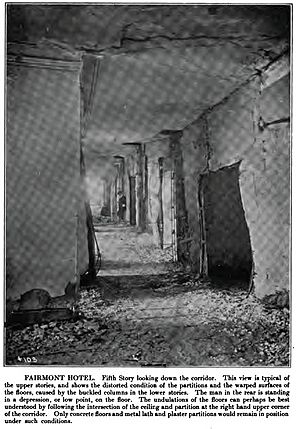 Damage to the fifth floor from the 1906 earthquake

The hotel was nearly completed before the 1906 San Francisco earthquake. Although the structure survived, the interior was heavily damaged by fire, and opening was delayed until 1907. Architect and engineer Julia Morgan was hired to repair the building because of her then innovative use of reinforced concrete, which could produce buildings capable of withstanding earthquakes and other disasters.

First concierge in the United States

The Fairmont was the first American hotel to offer concierge services. Tom Wolfe, who had trained in Europe, served as the Fairmont's first concierge from 1974 to 1981. He returned to the Fairmont in 1995.

Among the hotel's attractions is the Tonga Room & Hurricane Bar, a historic tiki bar, which opened in 1945 and was remodeled in 1952, and 1967. Elements of the bar were also "updated" in 2009. It features a bandstand on a barge that floats in a former swimming pool, a dining area built from parts of an old sailing ship, and artificial thunderstorms. In January 2009, the owners announced plans to close the Tonga Room in connection with a renovation and condo conversion of the hotel. In response, a group planned to file an application to make the Tonga Room an official San Francisco landmark. The plans were delayed and Tonga Room is still open today (despite many rumors of its temporary closure).

On May 9, 2012, funds managed by Oaktree Capital Management, L.P. and Woodridge Capital Partners LLC, a Los Angeles-based real estate developer and investor, bought the property for $200 million. They acquired the Mark Hopkins Hotel across the street in 2014.

The hotel was sold again on November 30, 2015 to the South Korean Mirae Asset Global Investments group for $450 million.

All content from Kiddle encyclopedia articles (including the article images and facts) can be freely used under Attribution-ShareAlike license, unless stated otherwise. Cite this article:
Fairmont San Francisco Facts for Kids. Kiddle Encyclopedia.