Mullumbimby is an Australian town in the Byron Shire in the Northern Rivers region of New South Wales. It promotes itself as "The Biggest Little Town in Australia". The town lies at the foot of Mount Chincogan in the Brunswick Valley about 9 kilometres (5.5 miles) by road from the coast. At the 2016 census, Mullumbimby and the surrounding area had a population of 3,596 people. Locals refer to the town either as "Mullum" or "Bimby". 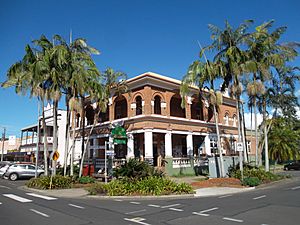 Originally occupied by the Bundjalung people, by the 1850s Europeans had established a camp site at the junction of two arms of the Brunswick River. This grew to become a village and later the township of Mullumbimby. Mullumbimby was originally a centre for the timber industry. Notably, red cedar was collected in great quantities from around the area, a part of the far northern New South Wales' "Big Scrub".

The town was a logical site for settlement by the timber hunters, as the Brunswick River is tidal in the town and navigable to that point, allowing logs to be floated down the river to its mouth at Brunswick Heads. The town's central location gave access to most of the catchment area, and it provided the best position for bullock teams to cross the river with their wagons loaded with timber. At low tide it is still possible to see the shallow region where the bullocks made the crossing of the Brunswick River, under the current "Federation Bridge" on Murwillumbah Road.

The name "Mullumbimby" meaning 'small round hill' was given to the district by Aboriginal people. The name is derived from the Bandjalung-Yugambeh dialect 'mulubinba' (possibly also pertaining to a native fern which grew in the vicinity). Although some sources claim this is because of the proximity of Mount Chincogan, Chincogan is probably too prominent in the landscape to fit the name. An alternative theory is that it refers to another, smaller and rounder hill. Suggestions include a medium hill to the north of Left Bank road, on which the towns water tower is located, or a smaller hill on Coolamon Scenic Drive, situated on the Daly Family Farm, near the current golf course. This latter hill is possibly supported by the abundant grass flats which surrounded it, known as Mullumbimby Grass. These naturally open grass flats, presumably hunting grounds for the local Bundjalung tribes, where later used by early European timber hunters to graze their bullock teams. The significance of this area lay not only in the feed it provided, but that some grasses in the naturally cleared area aided bullocks which had swallowed salt water when dragging timber into the surf for collection by nearby ships. 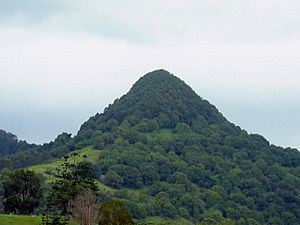 Mullumbimby is about 4 kilometres (2 mi) west of the Pacific Highway, near where the now closed Murwillumbah railway line crosses the Brunswick River. The line opened in 1894 and was closed in 2004 because of an argument over funding between Federal and State politicians, despite community resistance across the region. Closure of the railway line between Murwillumbah and Casino has reduced transport options in the region.

The Brunswick River starts in Mullumbimby, at the meeting of Main Arm and Mullumbimby creeks.

Mullumbimby is close to the localities of Ocean Shores, Brunswick Heads and Wilsons Creek. Its hinterland area includes the locales of Goonengerry, Huonbrook, Koonyum Range, Main Arm, Montecollum, Palmwoods, Wanganui and Wilsons Creek and coincides with the postcode area of 2482 which has a diamond shape of around 35 km by 45 km.

The main geographical feature of Mullumbimby, Mount Chincogan, was a minor lava plug of the now extinct Tweed shield volcano. The nearby Mount Warning was the main plug. 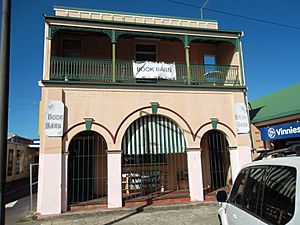 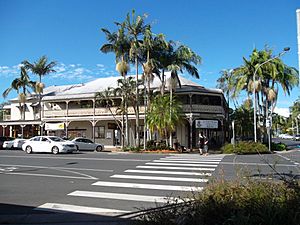 Mullumbimby was a separate municipality from 1908 until 1980 when it was forced to amalgamate with the Byron Shire. The Byron Shire Council offices were relocated to Mullumbimby in the 1990s.

Byron Shire, including Mullumbimby and nearby Byron Bay, became a centre of alternative or counter culture alongside the extant mainstream culture in the 1970s and 1980s, and remains so today.

Once the most notable specimens of the valuable timber trees had been collected (most notably red cedar, but also Australian Teak, Hoop Pine, Rosewood, Silky Oak, and Black and Red Bean), the Big Scrub timber trade collapsed and Mullumbimby became primarily a farming community. Like many areas of the Big Scrub, allotments were given in Mullumbimby and the surrounding areas by the NSW government on the condition that the owner cleared the land for agricultural use. Beef and dairy, along with bananas and sugar cane have traditionally been the notable products of the area. However, the subdivision of many of the larger farms and the emergence of numerous small scale farmers has led to a higher diversity of products. A weekly farmers' market has been developed to exhibit local produce.

A static inverter plant of HVDC Directlink is located at Laverty's Gap near Mullumbimby. This inverter plant was previously the site of a hydroelectric power scheme that powered Mullumbimby, Byron Bay and Bangalow from 1926, using water from a weir in nearby Wilsons Creek. The scheme was the fourth hydro electric power station in NSW and only the fifth on mainland Australia. Powering Mullumbimby for the first time in 1925, the scheme made Mullumbimby one of the first country towns in NSW to receive electricity. Although decommissioned in 1990, it is now of state heritage significance. The hydroelectric scheme was designed by William Corin (1867–1929).

The Mullumbimby Giants is the local rugby league club that competes in the Northern Rivers Regional Rugby League competition.

All content from Kiddle encyclopedia articles (including the article images and facts) can be freely used under Attribution-ShareAlike license, unless stated otherwise. Cite this article:
Mullumbimby Facts for Kids. Kiddle Encyclopedia.