Maclean is a town in Clarence Valley local government area in the Northern Rivers region of New South Wales, Australia. It is on the Clarence River and near the Pacific Highway. At the 2011 census, Maclean had a population of 2,600, the total area including Gulmarrad and Townsend districts had a population of 5,061. Its industries are tourism, sugar cane production, farming and river-prawn trawling.

Maclean is nestled at the base of Mt Maclean and the shoreline of the Clarence River were the river reunites after splitting around Woodford Island. A bridge connects Woodford Island to Maclean. It is part of the Tourist Drive 22. During times of heavy rain the town is under threat of flooding by the surging waters of the river.

Realignment of the Pacific Highway has reduced the traffic thought the town. More road work is currently happening and should be complete by 2020. 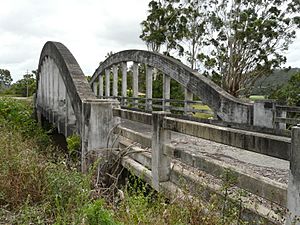 The area was originally inhabited by the Gumbaingirr or Yaygir indigenous peoples. Matthew Flinders landed near the mouth of the Clarence River in 1798.

Cedar cutting began in the area in the 1830s. The Maclean area was known as Rocky Mouth in the 1850s. The township was officially laid out in 1862 and named after Alexander Grant McLean, the Surveyor-General. The sugar industry began to develop around 1865.

The popular Maclean Highland Gathering has been held for over 100 years during the Easter weekend. Participants and bands contest traditional Scottish athletic and cultural competitions, such as caber tossing, highland dancing, band competition, and bagpiping. The "Maclean, The Scottish Town In Australia Association", is a community group which was formed in 1986 under the initiative of former bank manager Mr Graham Leach, and works to promote Maclean's strong Scottish origins. The work of this committee over the years has ensured that Maclean now has national and international recognition as 'The Scottish Town' in Australia.

Many street signs are written in English and Scottish Gaelic; power poles are painted with tartan patterns; and an excellent Stone cairn has been erected in Herb Stanford Park.

All content from Kiddle encyclopedia articles (including the article images and facts) can be freely used under Attribution-ShareAlike license, unless stated otherwise. Cite this article:
Maclean, New South Wales Facts for Kids. Kiddle Encyclopedia.