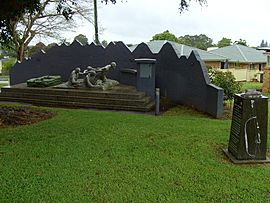 Europeans were first attracted to the area, known as the Big Scrub, in the 1840s by the plentiful supply of Red Cedar. It was not until 1865 that the first settlers selected land in the area, then known as the parish of Tuckombil. Some notable selections in the first five years include that of the Freeborn, Roberston, Graham, Newborn, Crawford, Mellis, and Newton families. By 1883 Alstonville boasted two pubs, six stores, two black-smiths, nine sugar mills, and four saw mills.

Sugar cane was an important industry to the early settlers, with many small mills operating across the district. These were later replaced by larger more efficient steam mills such as those erected in 1882 at Alstonville (owned by the Melbourne Sugar Company) adjacent to Maguires Creek and at Rous Mill adjacent to Youngman Creek. By 1896 the Rous mill boasted a light rail line to transport cane from Alstonville. From the 1890s ownward, dairies became common across the area, later becoming the dominant industry for the first half of the 20th century. Due to lack of refrigeration, cream, not milk, was the product of interest, which was transported to local factories to be made into butter. The first butter factories were located at Wollongbah (1889), Rous (1889) and Teven Road (1890). In 1900 the NSW Creamery Butter Company built the Alstonville factory near Maguires Creek, which was sometime later acquired by NORCO. After closing this building became a caravan factory, peanut factory, and finally a furniture factory, which is still open today.

One notable former resident of Alstonville is Patrick Joseph Bugden who was awarded a Victoria Cross (the highest military decoration which can be awarded to a member of the armed forces of the Commonwealth). "Paddy" served as a member of the 31st Battalion AIF during the First World War. The annual Anzac day parade starts at the Paddy Bugden Memorial, which is situated on the Bruxner Highway.

The village was originally known as "Duck Creek Mountain" after Duck Creek, which flows along the southern edge of town eventually merging with Emigrant Creek and the Richmond River. The name was given by the cedar cutters because of the abundance of wild duck on the upper tidal reaches of the creek. In 1873, due to conflict of the original name with a different duck creek the first postmaster and owner of the general store John Perry proposed the name "Alstonville". Alstonville, also the name of the Perry farm, was derived from Alston the maiden name of his wife Annie Alston.

Crawford house, a pioneer house situated next to Elizabeth Ann Brown park is now a historical museum. Directly behind is the town's major shopping centre, Alstonville Plaza, which has a few specialty shops, and a major supermarket. The town has a post office and several banks are located in the town.

Summerland House, previously known as the "House With No Steps", has been operating near Alstonville since 1971. Summerland House provides training and employment opportunities for in excess of 80 people with physical and intellectual disabilities in fields such as farming and hospitality.

Transport between Alstonville and Wollongbar, is by either car, or foot/bike, as a path runs between Bulwinkel Park and the shopping centre at Wollongbar.

Bus services are limited. There are no buses into or out of Alstonville at night or on weekends. As a result, the area has experienced problems with petty crimes and public nuisances.

A bypass has been constructed for the Bruxner Highway to remove congestion and improve safety. Currently Alstonville traffic becomes unusually congested (for such a small-population town) because its main road is the main thoroughfare between Lismore and Ballina, and because it has three schools (and bus stops for another three schools) located in a bottleneck with only one entry/exit road. As a result, parking for all three schools is usually congested. 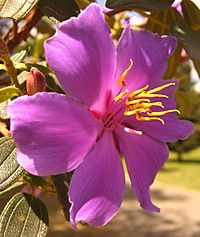 Tibouchina 'Alstonville' (Tibouchina lepidota) is a small tree grown in many parts of Australia for its brilliant display of purple flowers in autumn. This variety along with the dwarf variety 'Jules' was developed by Ken Dunstan a resident of Alstonville, hence the name.

The world's first commercial orchard of macadamia trees was planted in the early 1880s by Charles Staff at Rous Mill, on the Alstonville plateau, 7 km south west of the centre of town.

All content from Kiddle encyclopedia articles (including the article images and facts) can be freely used under Attribution-ShareAlike license, unless stated otherwise. Cite this article:
Alstonville, New South Wales Facts for Kids. Kiddle Encyclopedia.