Evans Head is a town in Richmond Valley Shire of the Northern Rivers region of New South Wales, Australia. At the 2011 census, Evans Head had a population of 2,722 people. It is 726 kilometres north of Sydney, and 11 kilometres east off the Pacific Highway from Woodburn.

Evans Head is named after a marine surveyor, Lt Evans, RN who carried out the first marine survey of the coastline in the area.

It is a coastal town and a holiday resort, playing host to one of the largest holiday parks in NSW. It is sandwiched between two national parks, the Bundjalung National Park and the Broadwater National Park. There is a wide curved beach that is popular for fishing, surfing and swimming. The 1874 wreck of a timber schooner, Pilot, is visible on the beach north of the town in times of high erosion. Evans Head also plays host to one of the few retired F-111 aircraft in Australia. In addition the museum has a host of authentic aircraft on display.

There is a prawn fishing fleet permanently moored in the estuary. Other industries include tourism and there is some sugar cane growing further inland. 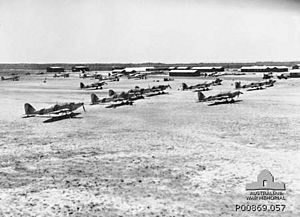 Northern Rivers Buslines operates two route from Lismore: 690 and 695, where the 695 also continues to Grafton from Evans Head

Ballina Buslines operates one route to Ballina via Woodburn: 660

All content from Kiddle encyclopedia articles (including the article images and facts) can be freely used under Attribution-ShareAlike license, unless stated otherwise. Cite this article:
Evans Head, New South Wales Facts for Kids. Kiddle Encyclopedia.