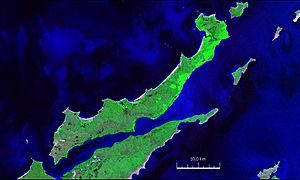 Elcho Island, known to its traditional owners as Galiwin'ku (Galiwinku) is an island off the coast of Arnhem Land, in the Northern Territory of Australia. It is located at the southern end of the Wessel Islands group located in the East Arnhem Region. Galiwin'ku is also the name of the settlement where the island's largest community lives. Elcho Island formed part of the traditional lands of the Yan-nhaŋu, according to Norman Tindale. According to J. C. Jennison, the Aboriginal inhabitants were the Dhuwal, who called themselves the Kokalango Mala (mala=clan.)

Elcho Island is approximately 60 kilometres (37 mi) long and 6 kilometres (3.7 mi) across at its widest point. It is bounded on the western side by the Arafura Sea and on the east by the Cadell Strait. Elcho Island is a short distance away from the mainland and Howard Island.

Galiwin'ku, located near the island's southern tip, is the main community on the island. It is the largest and most remote Aboriginal community in northeast Arnhem Land, the second largest Aboriginal community (in terms of concentrated population) in the Northern Territory, and ranks eleventh in population of the 69 local government bodies in the Territory. There are 60 mala or hereditary tribal groups, with up to 22 different dialects being used in the community. The lingua franca is now Djambarrpuyngu. The people of Galiwin'ku, approximately 2,000 residents, retain their traditions and culture. These are passed to future generations by adherence to strict traditional methods and education, including a means to help them embrace the wider Australian community.

There are also many outstations including Inglis Island on the namesake island and Matamata, Maparru, and Gariyak on the mainland. The island has a base population of 2,200 people, including 70 non-Aboriginal people. It was the home of the late Aboriginal folk musician Geoffrey Gurrumul Yunupingu. The population of Galiwin'ku varies during the seasons, with many outstation residents migrating to the community during the wet season due to inaccessibility. The community also serves approximately 25 outstations with a total population of approx. 450 people, with 12 of the outstations on Elcho Island, which are listed from north to south:

Galiwin'ku is a traditional Aboriginal community with restricted access; permission to visit is required by law and can be made through the Northern Land Council directly or via the Galiwin'ku Council. Total alcohol restrictions apply and there is no gasoline available on the island; all gasoline-powered vehicles use the low-aromatic petrol "Opal" as a fuel substitute.

The settlement was originally established as a Methodist mission in 1942, with the arrival of Harold Shepherdson, a lay associate of the Methodist Overseas Mission from Milingimbi. It remained under Church direction until 1974 when it became self-managed. Eighteen connected clan groups within the Elcho Island locale have close cultural ties with mainland Arnhem Land clans and language groups. The most commonly spoken languages are Djambarrpuyngu and Gupapuyngu (both Yolngu Matha languages). However, there are at least 12 more languages in use in the region.

The island is served by Elcho Island Airport.

A "subsurface radial dyke swarm" of dolerite known as Galiwinku Dolerite (named after the township) occurs on the Gove Peninsula and continues under the Arafura Sea and on the Wessel Islands, including Galiwinku and Milingimbi Islands. The layer of dolerite lies under the Mamadawerre Sandstone.

According to the 2016 census of Population, there were 2,206 people in Elcho Island (counted as Galiwinku (State Suburb) in the Census Report).

In 2007 a group of local Elcho Island dancers, the Djuki Mala dancers, choreographed and performed a dance routine to Zorba the Greek. The performance was recorded and uploaded to YouTube on 2 November of that year; in six weeks the video received more than 360,000 views, averaging 8,000 a day. Due to this success the group toured parts of Queensland and performed in the Art Gallery of New South Wales in Sydney in June 2008. They also appeared as the opening act at the Melbourne International Comedy Festival Gala 2009.

Elcho Island Arts supports Yolŋu artists in sharing their culture and allows them to derive an income from selling their artworks. It provides assistance in production and professional development for both emerging and established artists from Galiwin’ku and the surrounding Marthakal homelands, and helps to promote and distribute Yolngu art. The centre has been community-operated since 1992, and includes welll-known artists such as fibre artist Mavis Warrngilna Ganambarr, painter Peter Datjin Bararrwanga, carver and weaver Judy Manany and senior custodian of the Banumbirr Morning Star Pole, Gali Yalkarriwuy Gurruwiwi, among others.

In 2018, Elcho Island Arts was relaunched under the direction of senior artists Ganambarr, Manany, Burarrwanga, and Gurruwiwi.

Discovery of an ancient coin

In 2018 a coin, thought to be from the medieval Kilwa sultanate on the east coast of Africa was found on a beach on Elcho Island by archaeologist and member of the Past Masters, Mike Hermes. Similar coins have been found on Marchinbar Island, also in the Wessel Islands group.

All content from Kiddle encyclopedia articles (including the article images and facts) can be freely used under Attribution-ShareAlike license, unless stated otherwise. Cite this article:
Elcho Island Facts for Kids. Kiddle Encyclopedia.