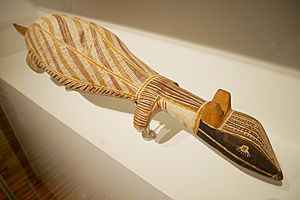 Milingimbi Island, also Yurruwi, is the largest island of the Crocodile Islands group off the coast of Arnhem Land, Northern Territory, Australia.

Aboriginal people have occupied this area for more than 40,000 years. It was an important ritual centre for the great ceremonies conducted by aboriginal peoples of this area. A settlement was established on the island in 1923 by the Methodist Overseas Mission. The mission attracted Aboriginal people from eastern clan groups to the island. These included Gupapuyŋu- and Djambarrpuyŋu-, as well as Wangurri- and Warramirri-speaking people. The traditional owners of Milingimbi and the surrounding seas and islands are Yan-nhangu-speaking Yolngu people.

The island was bombed by the Japanese during World War II and most of its population moved to nearby Elcho Island. After the war, the Island continued to be used as a Royal Australian Air Force base, before the missionaries returned in 1951. The Mission continued to administer the island until 1974 when administration was transferred to Milingimbi Community Incorporated. In 2008 Milingimbi became part of the East Arnhem Regional Council, which took over local government.

English is a second, third or fourth language for most Aboriginal residents of Milingimbi. A successful bilingual program of the Milingimbi CEC, started in 1974, was stopped. Bilingual education is still continued on some of the surrounding outstations by traditional owners concerned to support the linguistic, cultural and biological diversity of the Crocodile Islands. To this end the Yan-nhangu traditional owners have started the volunteer Crocodile Islands Rangers project to promote sustainable livelihood activities for local people in local languages.

The Island has its own airfield, Milingimbi Airport, with the airport call-sign YMGB. Milingimbi is the site of a Bureau of Meteorology weather station. The Island also has its own ALPA (Arnhem Land Progress Aboriginal Corporation) store and post office, along with an art gallery.

All content from Kiddle encyclopedia articles (including the article images and facts) can be freely used under Attribution-ShareAlike license, unless stated otherwise. Cite this article:
Milingimbi Island Facts for Kids. Kiddle Encyclopedia.