Coffs Harbour, in Australia, is a coastal city located on the Mid North Coast of New South Wales about 540 km (340 mi) north of Sydney, and 390 km (240 mi) south of Brisbane. It is one of the largest urban centres in the North Coast region, with an estimated population of 68,572 as at June 2015.

Coffs Harbour won an international "Bloom award" for population 20,001 – 75,000 in 2002. In addition an "Enhancement of the Landscape" in 2004 from the same organisation. Coffs Harbour's economy was once based mainly on bananas, now being superseded by blueberries as well as tourism and fishing. The wider region is known as the Bananacoast.

The city has a campus of Southern Cross University, a public and a private hospital, several radio stations, and three major shopping centres. Coffs Harbour is near numerous national parks, including a marine national park. There are regular passenger flights each day to Sydney and Melbourne departing from Coffs Harbour Airport. Coffs Harbour is also accessible by road, by NSW TrainLink trains, and by regular bus services.

Coffs Harbour is a regional city along the Pacific Highway between Newcastle and The Gold Coast. It has become a major service centre for those living between South West Rocks in the south and Grafton to the north.

Sawtell, 10 km south along Hogbin Drive from the city has become a satellite suburb of Coffs Harbour, with it increasingly referred to as being part of the city instead of its own entity as a town.

The surrounding region is dominated by coastal resorts and apartments with hinterland hills and mountains covered by forests, banana plantations, and other farms. It is the only place in New South Wales where the Great Dividing Range meets the Pacific Ocean.

The greater Coffs Harbour city is broken up into several suburb and precinct areas including:

The city is surrounded by outlying towns which are referred to by locals as suburbs of the Coffs Coast Region:

Coffs Harbour has a humid subtropical climate (Cfa according to the Köppen climate classification system) with marked seasonality of rainfall. The city is relatively sunny, receiving 122.1 clear days annually, higher than Brisbane and Cairns. Summers are warm, wet and humid. Winters are mild, pleasant and drier. 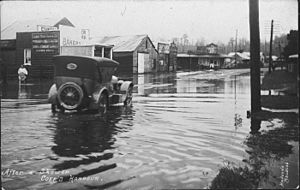 Looking west from Moonee Street after a shower of rain – Coffs Harbour, NSW, 1922 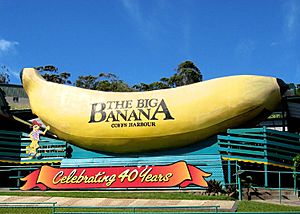 By the early 1900s, the Coffs Harbour area had become an important timber production centre. Before the opening of the North Coast Railway Line, the only way to transport large items of heavy but low value, such as timber, was by coastal shipping. This meant sawmillers on the North Coast were dependent on jetties either in rivers or off beaches for exporting their timber. Timber tramways were constructed to connect the timber-getting areas, the sawmills and jetties built into the ocean at Coffs Harbour.

Coffs Harbour owes its name to John Korff, who named the area Korff's Harbour when he was forced to take shelter from storm in the area in 1847. Its name was accidentally changed by the surveyor for the crown when he reserved land in the area during 1861. 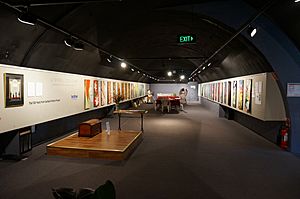 Coffs Harbour was the hub for a thriving banana industry. One of the biggest attractions is the Big Banana, one of the first of Australia's Big Things (it celebrated its 40th birthday in 2005), with the World's Largest Banana celebrating the region's best known export. There is also a popular underwater diving spot on a small natural reef.

The Coffs Harbour Jetty is an historically important timber wharf where coastal shipping once moved the timber from the hinterland. The jetty area is the subject of current planning by Council and consultants to develop a cultural precinct and rejuvenated residential area.

Nearby, the Solitary Islands Marine Park preserves a diverse underwater ecosystem that mirrors the terrestrial biodiversity, covering the southern limit of northern tropical species and the northern limits of the southern temperate species. Muttonbird Island is accessible by walking along the breakwater from the harbour, with the nature reserve protecting a significant wedge-tailed shearwater breeding site. The Muttonbird Island footpath leads to a viewing platform where whales are often spotted between June and November.

There are many national parks, reserves and marine parks surrounding the city, including:

The town's water supply comes from the nearby Orara River at Cochranes Pool and is supplemented by the Nymboida River. The city hosts the Coffs Harbour Regional Botanic Garden.

Although the Pacific Highway cuts through the centre of the city, much attention has recently been focused on obtaining state government commitment to determining the routes of proposed highway deviations at a number of places including Bonville, the North Boambee Valley to the west of Coffs Harbour and north of Arrawarra to Wells Crossing.

Forest Coach Lines runs frequent buses to the northern suburbs of Coffs Harbour and some less frequent services to Grafton.

Most of the Beaumonts buses in 2011 were bought by Newcombe, originally Beaumonts bus service ran in the Orara Valley carrying high school and primary school students from the city of Coffs Harbour to their rural homes.

The Coffs Harbour Aero Club on Aviation Drive supports private pilots. Flying lessons and discovery flights, as well as airwork/charter flights are available from the club, which is also working closely with local high schools to provide flying training for students.

Flying lessons and discovery flights, as well as airwork/charter flights are available from Coffs Coast Aviation Centre, which is also working closely with local high schools to provide flying training for students.

All content from Kiddle encyclopedia articles (including the article images and facts) can be freely used under Attribution-ShareAlike license, unless stated otherwise. Cite this article:
Coffs Harbour Facts for Kids. Kiddle Encyclopedia.