Woolgoolga is a town on the Mid North Coast of New South Wales, Australia. It is on the Pacific Highway, approximately 550 km north of Sydney and 365 km south of Brisbane. The closest city to Woolgoolga is Coffs Harbour, which lies 25.8 km to the south. Woolgoolga has two beaches on the Pacific Ocean. The area has long been a centre of banana growing in New South Wales, but this industry has declined in the face of competition from Queensland and overseas. Recent times have seen many banana plantations replaced by blueberries after banana sales slumped in the late 1990s. Timbergetting and sawmilling was established in 1883. A government jetty was constructed in 1892 upon which tramways were laid. These led to sawmills in the town which in turn were connected by light railway to the Jesse Simpson Range forest areas. The jetty was demolished over a prolonged period from 1952 to 1956.

Permanent European settlement occurred in the 1870s. Prior to this, the area was inhabited by the Gumbaingirr Aboriginal tribe. It is believed that the name of the town derives from the word "Weelgoolga", which was used by the local Aborigines to describe the area, and the lilly-pilly trees that grew there. The name "Woogoolga" was gazetted in 1888, and changed to the current name of Woolgoolga in 1966.

Woolgoolga was an early centre of Sikh migration to Australia. Sikhs had migrated to New South Wales and Queensland prior to the imposition of the prohibition of non-European migration under the White Australia Policy in 1901 and many of them then led a marginalised life on the north coast of New South Wales and in southeastern Queensland. Some Sikhs began to settle in Woolgoolga during World War II, because war-time labour shortages led to a relaxation of the previous prohibition of non-European labour in the banana industry. After the war they were able to acquire leasehold and freehold banana plantations. Woolgoolga has the largest regional Sikh/Punjabi population in Australia, and they are now said to own 90% of the banana farms and are also diversifying into blueberries. 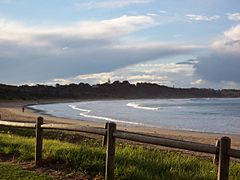 Woolgoolga's coastal location and temperate climate make it a popular tourist destination. The town is bypassed by the Pacific Highway and many travellers break their journey in Woolgoolga.

The Sydney 2000 Olympics torch relay passed through Woolgoolga, as did the 2006 Commonwealth Games Queen's Baton Relay.

In 2011, the area hosted Rally Australia, the 10th round of the World Rally Championship. It hosted stages 22 and 25 at Plum Pudding.

Curryfest is the largest single gathering for the Woolgoolga community with over 10,000 people expected to attend the April 2011 event. Curryfest was inaugurated in 2006 (with the help of local celebrity Jack Thompson), to celebrate the culture of the local Sikh community.

The festival was originally run by the Woolgoolga Chamber of Commerce. This occurred in the initial two years of 2007 and 2008, however the festival became incorporated into its own identity for 2009. The event still uses the name and backing of the Chamber of Commerce but now partially pays for the event itself, including through the introduction of a two dollar entry fee in 2009 (Star FM 105.5 interview 09/04/2009).

Woolgoolga has a pub and a number of cafes and restaurants.

The Seaview Tavern (corner of Clarence and River Streets), also known as The Fountain on the Mountain, is the only pub. There is usually live music on Friday and Saturday nights and a function room upstairs where larger gigs take place.

Bluebottles (corner of Beach Street and Lake Road) is one of the many cafes. It serves as a more upmarket establishment for lunch and dinner. Thursday night is jazz night with live jazz music played throughout the evening.

Other cafes are Bonetto's, Possums and The Beach House.

There are two pizza restaurants in Woolgoolga: Woolgoolga Pizza Place and Riptide Pizzeria.

Woolgoolga also has Woolworths supermarket which is located right on Solitary Islands Way which was previously the Old Pacific Highway.

All content from Kiddle encyclopedia articles (including the article images and facts) can be freely used under Attribution-ShareAlike license, unless stated otherwise. Cite this article:
Woolgoolga, New South Wales Facts for Kids. Kiddle Encyclopedia.