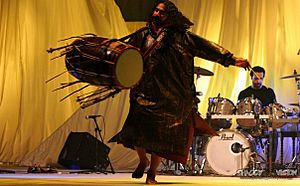 The dhol is a drum used during Punjabi wedding processions and parties. In Western Punjab, the beats of dhol have been an element in the ceremonies of the great Sufi mystics and their followers. The patterns of dhol have been developed to catalyze the mind of the devotee as is seeking spiritual trance. Someone who plays the Dhol is known as Dholi (Urdu: دھولی). Traditionally the Punjabi dhol has been the domain of men.

All content from Kiddle encyclopedia articles (including the article images and facts) can be freely used under Attribution-ShareAlike license, unless stated otherwise. Cite this article:
Dhol Facts for Kids. Kiddle Encyclopedia.