Forest Coach Lines is an Australian bus and coach operator. Founded in 1930 in the Northern Suburbs of Sydney, since 2016 it has expanded with purchases in the Mid North Coast and North West Slopes regions in New South Wales. It is a subsidiary of ComfortDelGro Australia. 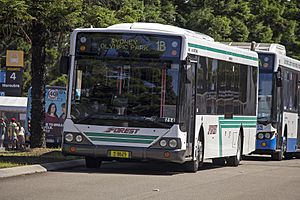 In March 1947 route 52 Chatswood to Artarmon was purchased but quickly sold in November of that year. From the late 1940s the Frenchs Forest area expanded rapidly and by 1960 the Royle Brothers fleet had expanded to 12 buses.

The operation was renamed Forest Coach Lines in February 1964 and relocated to a new depot in Belrose. In May 1965 route 201 ceased. An expansion into coach charter saw Forest Trailways established with a separate depot in Manly Vale. Eric and Trevor Royle retired in the mid-1960s with the Trevor's sons Bernard and Tony taking over.

In 1973 services were extended to Warringah Mall and in February 1982 to Duffys Forest. In August 1979 a new depot was opened in Terrey Hills to replace those at Belrose and Manly Vale.

The Passenger Transport Act 1990 allowed Forest Coach Lines to commence operating services into the Sydney central business district in July 1992. In August 1991 the Warringah Bus Lines operation was purchased from Shorelink and in July 1998 part of St Ives Bus Service was purchased.

In November 2012 it was announced that Forest had been successful in retaining the contract to operate Sydney Bus Region 14.

In December 2014, a majority shareholding in the business was purchased by mid-market private equity firm Next Capital.

In September 2016 the business of Manly Coaches was acquired with no vehicles. In November 2016, the Mid North Coast business of Ryan's Bus Service was purchased with depots in Coffs Harbour and Woolgoolga.

Forest Coach Lines built up its fleet with Leyland buses. In 1972 it placed the first Volvo in Sydney in service. Since then most purchases have been on Volvo or Mercedes-Benz chassis. In March 2013 two Bustech CDi double deckers were introduced. As at February 2017, the fleet consisted of 126 buses and coaches.

When the business was renamed Forest Coach Lines in February 1964, a new white and green livery was introduced. These remained the fleet colours until 2013 when as part of its new regional bus contract Forest was required to adopt the Transport for New South Wales white and blue livery.

All content from Kiddle encyclopedia articles (including the article images and facts) can be freely used under Attribution-ShareAlike license, unless stated otherwise. Cite this article:
Forest Coach Lines Facts for Kids. Kiddle Encyclopedia.