Willoughby is a suburb located on the lower North Shore of Sydney, in the state of New South Wales, Australia 8 kilometres north of the Sydney central business district, in the local government area of the City of Willoughby.

The City of Willoughby takes its name from the suburb but its administrative centre is located in the adjacent suburb of Chatswood, which is the local area's major commercial centre.

There is some conjecture as to how Willoughby was named. Some historians believe it was named after a parish, while others believe that Surveyor-General Sir Thomas Mitchell decided to commemorate Sir James Willoughby Gordon whom he had served during the Peninsular War and was the quartermaster-general in England when the First Fleet sailed to Botany Bay.

Captain Arthur Phillip's search for "good land, well watered" led to the discovery and colonisation of the rough shores of Roseville Chase, where Samuel Bates built a farm at Echo Point. 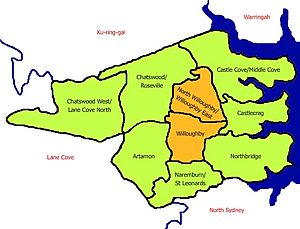 Later developments included the building of the first post office in 1871 and the construction of Pommy Lodge in the same year. The latter—a small sandstone building in Penshurst Street—was originally the Congregational Church, which later changed premises. Laurel Bank Cottage, a single-storey home, was constructed in Penshurst Street in 1884. The cottage is now owned and run by the local Masonic Lodge as a function and conference facility.

Circa 1920, Telford Lane—between Fourth Avenue and Eastern Valley Way—was created and paved; the method used was the one pioneered by Thomas Telford in England in the nineteenth century. This lane is one of the few surviving examples of the Telford method in Sydney.

In 1934, the Willoughby incinerator was built in Small Street, after a design by Walter Burley Griffin. It has been described as "a particularly successful example of an industrial building integrating function with site." Like Telford Lane, the incinerator is listed on the Register of the National Estate.

All content from Kiddle encyclopedia articles (including the article images and facts) can be freely used under Attribution-ShareAlike license, unless stated otherwise. Cite this article:
Willoughby, New South Wales Facts for Kids. Kiddle Encyclopedia.